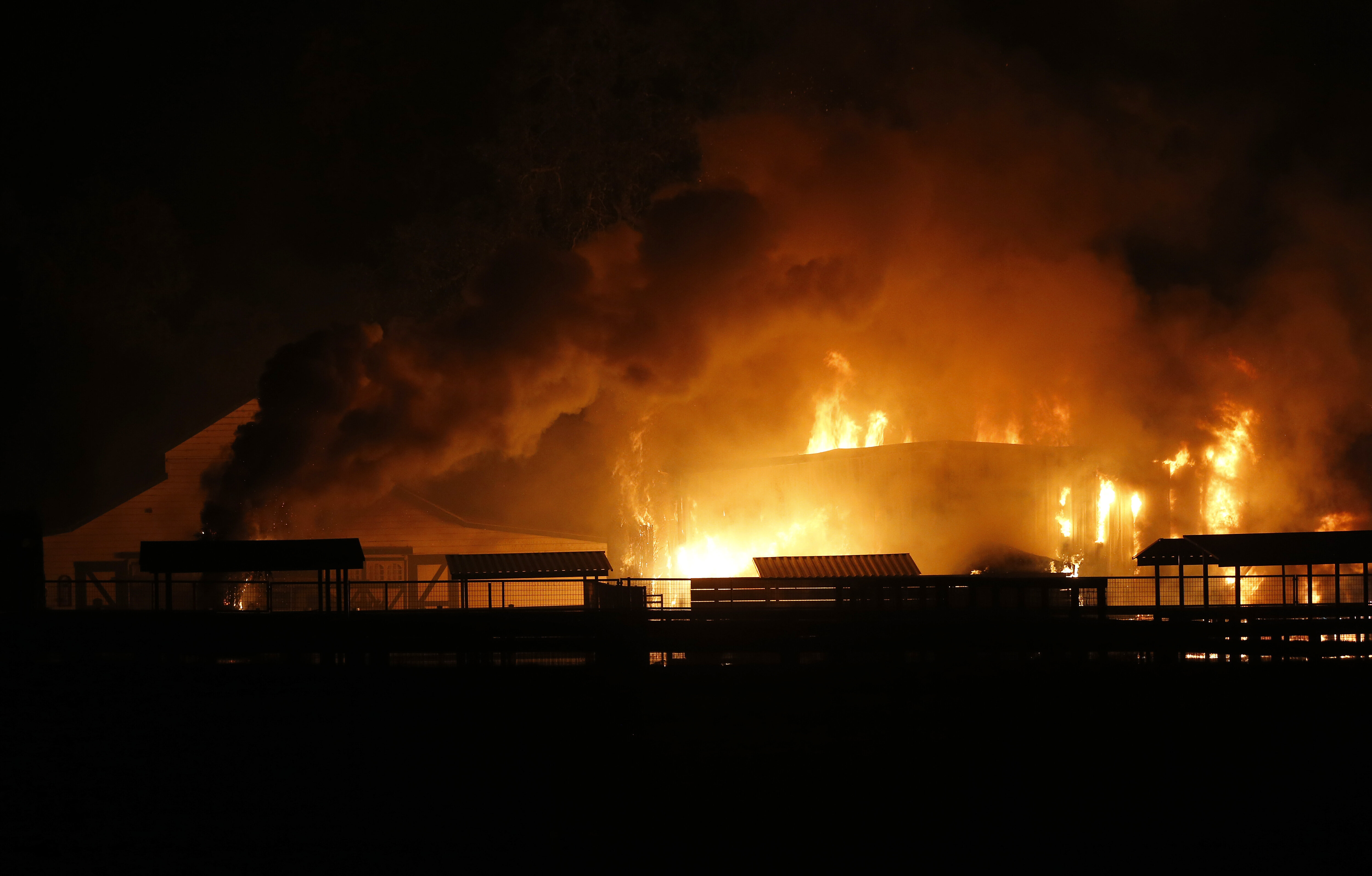 Carolina Manzano Wolohan, 84, was alone at home, in the dark, and she was scared. As a massive fire burned an hour’s drive north in Geyserville, California, her electricity was cut for three days. The two machines that help keep her alive ― a defibrillator for her heart and a CPAP machine to help her breathe at night ― couldn’t work without power.

“It was very scary. I was trying to keep myself awake so I don’t fall asleep and my heart stops functioning,” Manzano Wolohan said Thursday of the nights she spent in the dark earlier this week.

While the now-nearly 77,000-acre Kincade fire burned in Sonoma, Pacific Gas & Electric cut power to over 2 million people in Northern California over the weekend as dry air and high winds threatened to fuel new blazes. (Power was back in some areas Tuesday, but the utility carried out yet another round of shutoffs to nearly 600,000 households in 29 counties from Tuesday to Thursday.) Manzano Wolohan, who lives in Novato, was in the dark from Saturday to Tuesday.

“The only way I could do it was keep myself awake as much as I can ― I can sense when the heart starts losing its beat, I can pump my chest with my hand,” Manzano Wolohan said. “It’s very stressful, particularly when you are by yourself in the dark. It’s a very vulnerable situation.”

It’s very stressful, particularly when you are by yourself in the dark. It’s a very vulnerable situation.
Carolina Manzano Wolohan, 84

As over a dozen major blazes burned across California amid windy, fire-prone weather this past week, officials ordered mass evacuations ― of around 180,000 people at one point in Northern California ― and utilities enacted widespread power shutoffs. By Thursday morning, the Sonoma fire was largely contained, and evacuations were being lifted and power gradually brought back.

For more vulnerable people, like seniors with disabilities who may have limited mobility and rely on machines to live, the fires and related outages left some in life-threatening positions.

Alyse Clayman, the director of Jewish Family and Children’s Services for Marin and Sonoma counties, knows that all too well. The organization serves about 2,500 seniors and disabled people per year in the region, delivering meals to homebound residents or driving them to medical appointments. Clayman said that amid the evacuations and blackouts, their clients were “jittery,” “scared” and “just desperate to have somebody there.”

“It’s scary. We have a lot of clients who just watch TV all night long and now are alone with nothing,” Clayman said Wednesday, adding that for seniors on a fixed income, losing a fridge- and freezer-worth of food when the power gets cut can be a significant loss. “We spoke to people this morning who are cold and hungry.”

When the power cut Saturday night in Marin County, 82-year-old Neil Whitelaw was caught by surprise ― PG&E had said it’d happen around 4 p.m., but it was 8:30 p.m. He’d thought maybe he wasn’t going to lose power. But then the lights went out, and he was plunged into dark.

Whitelaw, who lives in an apartment in Sausalito by himself, has limited mobility and uses a wheelchair. Suddenly, he was stuck in an “awkward” position, his electric wheelchair midway between sitting and standing. He stayed there ― “somewhat curled up,” his abdomen pushing up against his lungs, his back a “wreck” ― until his caregiver arrived on Monday morning.

“I was alone without lights and I was trapped in [a] lift chair for 36 hours,” said Whitelaw.

Clayman said the fires and associated evacuations and shutoffs have taken a “huge emotional toll, as well as a physical and financial toll” on Californians, particularly vulnerable seniors with disabilities. As a therapist, she’s noted that some clients are still recovering from trauma associated with the 2017 fires in Sonoma. The blazes, the deadliest in state history at the time, killed 44 people and razed thousands of homes around Santa Rosa.

California’s wildfires have been breaking records in recent years. Last year, the Camp fire near Paradise overtook the 2017 Sonoma fires as the deadliest ever in the state, killing 85 people and burning nearly 18,000 homes ― only about a three hours’ drive northeast from the current fire.

Marrianne McBride, who works at the Santa Rosa-based Council on Aging, said that of the 1,200 seniors the organization serves daily in Sonoma, about 350 were not evacuated and were home without power this week. (The rest of their clients were evacuated with family or to a facility temporarily.)

“Those left behind … those are the ones having a hard time, especially with cold nights,” McBride said, adding that some who relied on wells also had no water. “These are frail, isolated seniors who do not drive. So they’re anxious about alerts, because they don’t have the means to get themselves out.”

I was alone without lights and I was trapped in [a] lift chair for 36 hours.
Neil Whitelaw, 82

For people with disabilities, regardless of age, power outages can put their health at risk because they may rely on medical equipment that requires electricity, or on refrigeration for medication, noted Curt Child, legislative director of Disability Rights California.

This past week, he’s heard concerns from individuals who rely on oxygenators to breathe and from a family whose child with epilepsy requires an electronic device to be monitored through the night. He noted that evacuations and outages can also prevent caretakers from getting to clients in need.

Whitelaw experienced that firsthand. His caretaker, who couldn’t get gas because stations had closed amid the outage in Marin, had to drive to San Francisco to fill up before driving back to reach him.

Even so, once Whitelaw’s caretaker got him into bed and set him up with water, medications and a urinal nearby, Whitelaw was alone again once he departed. As another night fell without power, Whitelaw couldn’t manage to get the flashlight on. In the dark, he knocked over his drink and urinal, soaking his sheets and himself.

“So here I am laying in bed, in a pool of urine and beverage that crept up my T-shirt, so my back was icy cold and wet, until my caregiver got here the next day,” Whitelaw said. “I’m used to dealing with pain in my legs and hands and riding it out ― but in a position like that, when your whole back and body is soaked and it’s ice cold because there’s no heat, I can scarcely remember how troubled I was.”

California Gov. Gavin Newsom (D) has repeatedly criticized PG&E for the outages, saying they’re a result of the company’s “greed” and mismanagement. PG&E has been linked to several devastating fires in the state in recent years ― including the deadly Camp fire, which ignited after one of the utility’s power lines malfunctioned.

“The utility-initiated power shutoffs put the health and well-being of California’s most vulnerable residents at risk,” California Health and Human Services spokesperson Scott Murray told HuffPost. The state’s health department launched a hotline during the outages this week to “help medically vulnerable Californians” by providing information on resources available during shutoffs. About 300 people have called in for assistance.

Child deemed it an “important effort” by the state.

Whitelaw, meanwhile, said PG&E was “totally irresponsible” and argued that the government, namely municipalities, should take over the electric system “and do something different.”

“I know the fire dangers are getting worse,” Whitelaw said, noting that he’s been living in California for 52 years. “But we haven’t had to deal with anything like that until this year.”