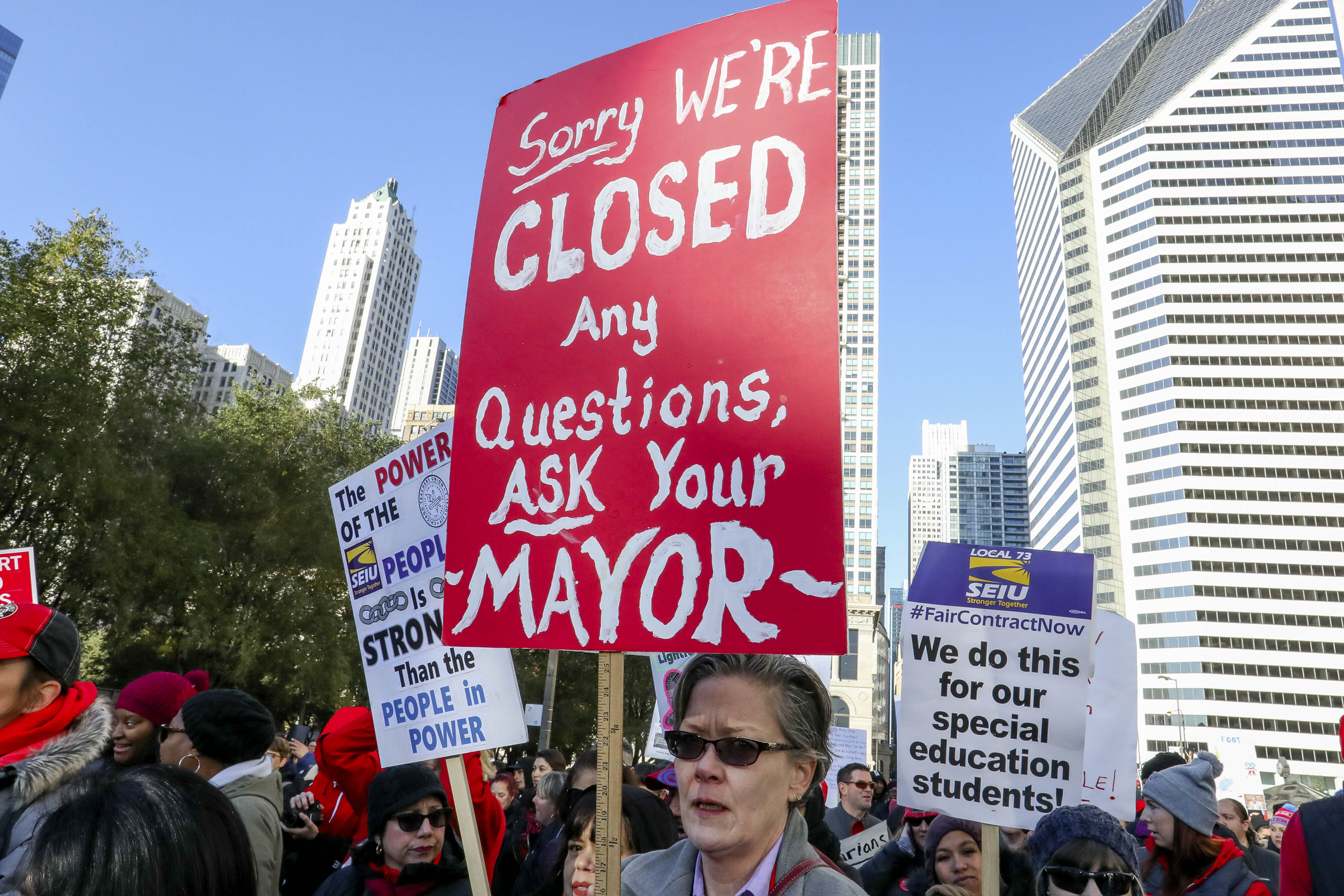 Chicago Mayor Lori Lightfoot said Sunday night that the city has reached a tentative deal with striking school support staff, but that there is no agreement in sight with the teachers union.

The lack of a deal between Chicago Public Schools and the Chicago Teachers Union has led to classes being canceled for Monday, making this walkout Chicago’s longest teachers strike in more than 30 years. More than 300,000 students will have missed eight days of school on Monday due to the strike, which is now entering its third week.

In a press conference Sunday, Lightfoot and CPS CEO Janice Jackson said the city had reached a tentative agreement with SEIU Local 73, the union representing 7,500 school support staff that have been striking alongside CTU for the city to meet their demands. School support staff include bus aides, special education aides, custodial workers and security officers.

The tentative agreement with SEIU reportedly includes a 16% pay increase; more dollars an hour extra for bus aides, security and custodians after a certain number of years; more input from bus aides on routes; and better working conditions for special education aides, according to Chalkbeat Chicago.

“This is a victory for working people in Chicago and shows what is possible when we unite and take action,” SEIU Local 73 President Dian Palmer said in a statement. “The lowest paid support workers who are the backbone of our schools are going to see raises that mean their families won’t have to struggle living in an expensive city where costs keep going up.”

The support staff union’s bargaining team still needs to review and finalize the deal before the contract would end the strike. Palmer said that SEIU will be “on picket lines in solidarity” with CTU on Monday.

At her press conference, Lightfoot expressed visible frustration that CTU won’t agree to her proposals. The mayor said she offered average teacher pay rising to $100,000 over the contract’s duration; no health insurance increases for three years; a full-time nurse and social worker in every school; and compromises on the large class sizes that teachers have been dealing with.

“This is by any estimation an incredible offer. Despite all of this, the CTU has not accepted it,” Lightfoot said. “We are enormously disappointed that CTU simply cannot take yes for an answer.”

CTU responded to Lightfoot’s complaints on Twitter, stressing that it took Jackson 10 months and a strike to come to the bargaining table, and alleging that the mayor is pretending there isn’t enough money to fund the union’s demands. The union has asked for smaller classes sizes, better pay and benefits, fully staffed support systems and restorative justice programs for students.

“Let’s just cut through the spin from City Hall and get to it: The money our schools need is there. The mayor isn’t bailing out CPS. She’s raiding her CPS piggy bank to avoid taxing the wealthy donors who put her in office,” the union tweeted.

Let’s just cut through the spin from City Hall and get to it: The money our schools need is there. The mayor isn’t bailing out CPS. She’s raiding her CPS piggy bank to avoid taxing the wealthy donors who put her in office.

CTU said that negotiations are now down to “some of the most important and thorny issues,” like pay for veteran teachers, salary increases for paraprofessionals and prep time. The union said that there’s a $38 million total in cost difference between its proposals and the district’s proposals, which it said amounts to about half of 1% of the annual CPS budget.

The city has pushed back against the notion that the cost difference is $38 million, alleging the union is asking for closer to $100 million in changes.

“She’s shifting nearly $100 million out of the Chicago Public Schools budget ― money that should go to students and classrooms ― and using it to plug the budget hole for the city,” CTU tweeted, citing the $60 million in a pension cost shift and the $33 million increase for the police department cited in Lightfoot’s new city budget proposal.

“A fraction of 1 percent of the annual CPS budget stands between us and an agreement. A number of demands would cost the district virtually nothing,” the union continued. “At this point, everyone is suffering but the person who could actually make a difference: the mayor.”

CTU got a positive boost of national spotlight over the weekend when Chicago native Chance the Rapper sported a CTU sweatshirt while hosting “Saturday Night Live.” The rapper said he fully supports the teachers union in their negotiations and mentioned that he donated $1 million last year to Chicago’s public schools.

Here’s @chancetherapper on the @CTULocal1 strike: “Honestly to the teachers in Chicago, I know you are on strike right now. I fully support you. I just wish when I was in school my teachers had gone on strike.” pic.twitter.com/os9M8gTqtW

Saved By The Beard? James Harden Slams A Ball Into His Own Face, Walks Away