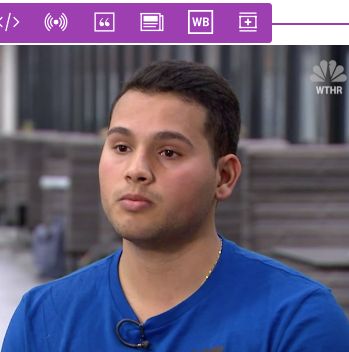 A Purdue University engineering student was stunned when a CVS drugstore clerk in Indiana prohibited him from buying medicine because he didn’t have a visa to go with his Puerto Rico driver’s license.

Last month, the unidentified clerk at a West Lafayette store refused to sell over-the-counter cold medicine to Jose Guzman Payano because she was convinced he was an immigrant, the engineering student told NBC Indianapolis affiliate WTHR.

“She said she needed a U.S.-issued ID, Canada or Mexico license. That’s when I tell her that was a U.S.-issued license, and I didn’t need anything else,” Guzman Payano said. “When she asked me for a visa, I was in shock.”

Puerto Rico is a U.S. territory and Puerto Ricans are U.S. citizens.

Because he had encountered similar problems, Guzman Payano carries his passport in his backpack, which he said he also presented. The clerk refused to accept that because he had no proof of his “immigration” status.

The incident circulated on social media after his mother complained about it on Facebook.

“My son, or any other consumer, is not obligated to disclose his immigration status to any CVS employee!” wrote Arlene Payano Burgos. “Whatever triggered her to discriminate against my son embodies exactly what is wrong in the United States of America today.”

CVS has since apologized to Guzman Payano and his mother.

In a statement emailed to NBC, Amy Thibault, senior manager of corporate communications at CVS, said:

“While we are confident that this was an isolated incident, we will be reiterating to all of our stores the correct procedures to follow when requesting identification that is required by law for certain transactions, as well as the forms of identification we accept, including IDs issued by U.S. territories such as Puerto Rico.”

“I guess I should be thankful that he wasn’t thrown in the back of an ICE van and interrogated, or worse,” Payano Burgos wrote on Facebook.