Democrats Lay Out Legal Basis For Removing Trump From Office 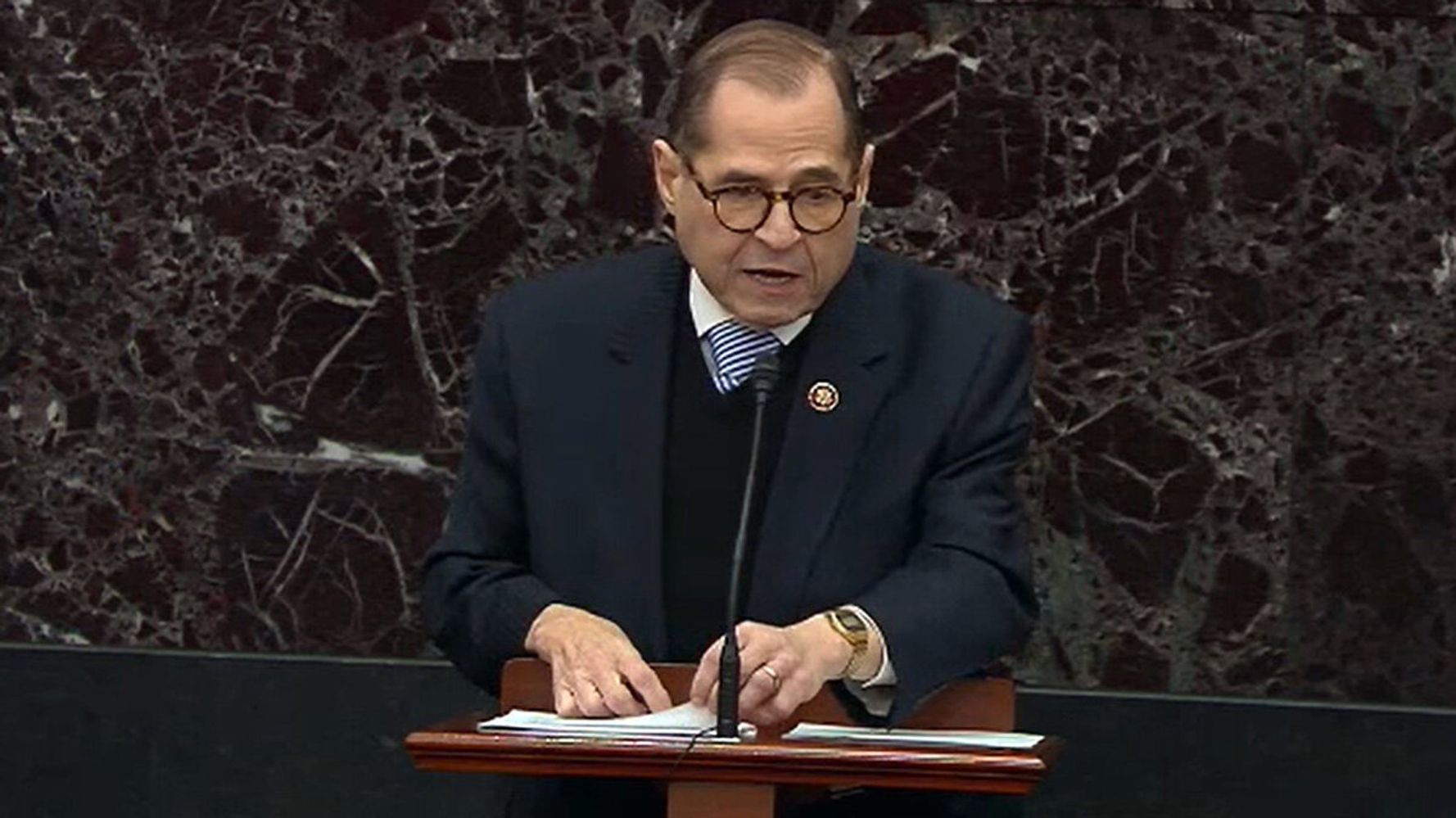 WASHINGTON ― Democrats laid out their case before the Senate on Thursday as to why President Donald Trump should be removed from office for abusing his power by pressuring the government of Ukraine to interfere in the 2020 presidential election for his own benefit.

And they used the words of Trump’s own allies ― including Sen. Lindsey Graham (R-S.C.), one of the senators who will decide Trump’s fate ― to make their point.

Thursday was the second day of House Democratic arguments before the Senate, and lawmakers serving as prosecutors focused on the first article of impeachment against Trump: abuse of power.

Trump’s lawyers have argued that the president hasn’t been accused of a specific crime, so the allegations in articles of impeachment against him can’t be “high crimes and misdemeanors” meriting impeachment and removal from office. But the managers played video footage of some of the president’s biggest defenders contradicting that idea in the past.

“What is a high crime? I think it’s truth. I think that’s what they meant by high crimes. Doesn’t have to be a crime. It’s just when you start using your office and you’re acting in a way that hurts people, you committed a high crime,” Graham said in 1999 when he served as a congressman and an impeachment manager in the Senate trial of then-President Bill Clinton.

But when House Judiciary Committee Chairman Jerry Nadler (D-N.Y.) played the clip of Graham on Thursday, the South Carolina Republican was not present in the upper chamber. He had stepped out moments before.

Nadler also highlighted past statements by Attorney General William Barr and attorney Alan Dershowitz, a member of Trump’s own impeachment defense team, that are inconsistent with their current defense of Trump.

Trump’s lawyers have argued that even if Trump abused his power in an attempt to pressure Ukraine to open investigations into his rival, former Vice President Joe Biden, it would not matter because the House never accused him of committing an ordinary crime.

The argument is widely disputed, however. (Past impeachment articles have highlighted statutory crimes like obstruction of justice as well as non-statutory offenses such as abuse of power.)

“Impeachment is not a punishment for crimes,” Nadler said. “The Constitution is not a suicide pact. It does not leave us stuck with presidents who abuse their power in unforeseen ways that threaten our security and democracy.”

Nadler, one of the impeachment managers, opened Thursday’s session by citing law, history and congressional intent behind the power to remove a sitting president from office. He then argued that Trump’s dealings with Ukraine ― in which he urged the Ukrainian government to investigate a political opponent ― fit the bill and merited Trump’s ouster.

“The president’s conduct is wrong. It is illegal. It is dangerous,” Nadler said Thursday. “It puts even President Nixon to shame.”

“The act of solicitation itself, just the ask, constitutes an abuse of power. No president has abused his power in this way,” Nadler added.

Impeachment manager Rep. Sylvia Garcia (D-Texas) spent more than half an hour debunking Republican claims that Trump had legitimate reasons for wanting Ukraine to announce an investigation into Biden, who happens to be the president’s highest-polling electoral opponent.

Trump and his allies have claimed that as vice president in 2015, Biden improperly sought the firing of a Ukranian prosecutor who might have looked into Burisma, the Ukrainian energy company that employed Biden’s son Hunter as a board member.

Garcia repeated what several diplomats told the House Intelligence Committee last year ― that the prosecutor’s investigation into Burisma had been dormant. Garcia said, “Vice President Biden called for the firing of this prosecutor at the direction of U.S. policy” ― in other words, he hadn’t done it for himself. Garcia also noted that Trump’s interest in Biden’s role didn’t develop until this year.

“It wasn’t until Biden began beating him in the polls that he called for the investigation,” Garcia said.

Following Garcia’s presentation on Thursday, Trump attorney Jay Sekulow said the president’s defense team would discuss Biden during their arguments later this week because Democrats had gone there. (They likely would have gone there anyway.)

Thursday’s arguments in the Senate follow evidentiary presentations by the House managers. On Wednesday, the Democrats laid out an impressive chronological narrative of Trump’s dealings in Ukraine, which began in March of last year and involved several senior members of Trump’s administration, as well as outside proxies like Trump’s personal lawyer Rudy Giuliani.

“Everyone was in the loop,” said Rep. Adam Schiff (D-Calif.), the lead impeachment manager.

But Republicans said they weren’t convinced on Thursday, panning the case as nothing new even though they’d voted on Monday to block any new witnesses or material from inclusion.

Sen. Roy Blunt (R-Mo.) cast doubt on the notion that including additional witnesses and evidence in the trial would matter much because many of his colleagues remain skeptical of the case, and the bar for Trump’s removal ― 67 senators ― is very high.

“Would a witness change the result?” Blunt asked. “Not would the witness … tell us something we might not know because we’d just like to know, and is it worth continuing to reward the bad performance in the House to stretch this out with no change in outcome?”