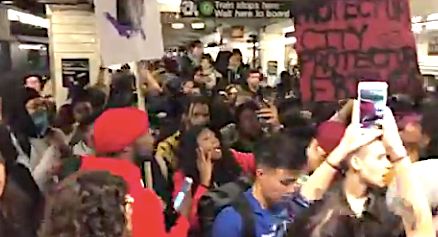 Some 1,000 demonstrators poured onto downtown Brooklyn streets and into at least one subway station Friday evening to protest police brutality and aggressive policing in the transit system.

Marchers chanted, “Hands off black kids, NYPD,” and “Hey, hey, ho ho, NYPD has got to go.” Activists criticized the “overpolicing” of the transit system amid a new crackdown on fare-beaters that they say is heightening tension between New Yorkers and an increased number of police assigned to the subways. They want the new program dropped. Gov. Andrew Cuomo announced the beefed-up operation this summer to place an additional 500 uniformed officers on subways and buses to battle fare evasion and other crimes.

Friday’s protest was triggered after a troubling video emerged last weekend on social media showing a police officer apparently punching two teenagers near a fight on a Brooklyn subway platform.

One of them, a 15-year-old, and his family announced a $5 million notice of claim ahead of a planned lawsuit against the officer and the New York Police Department, WABC-7 reported.

“I’m truly concerned about what I saw on that video,” Brooklyn Borough President Eric Adams said at a press conference after the video emerged. “You cannot openly punch a young person in the face merely because you are caught up in the aggression of the moment.” (See the video above.)

He called for an investigation and new training for officers.

I need to know the names and badge numbers of all of these officers who are punching these young Black boys in the face. They are teenagers.

None of this brutality is OK.

A separate disturbing video showed police with guns drawn storming a subway car filled with passengers to apprehend a 19-year-old suspect whose arms were raised in surrender for allegedly failing to pay the $2.75 fare by hopping a turnstile. “Call my mom,” he told someone on the train. He was charged with fare evasion. A spokesman for the NYPD said police believed he had been carrying a gun, but no weapon was found.

In case you’re wondering how an arrest in NYC goes down. The guy has made absolutely no indication that he would flee or fight and wasn’t trying to hide.

If you can’t see, the reason everyone moved was because all the police had taken out their guns and aimed at him. pic.twitter.com/dAstrtMntz

Direct your outrage at @NYGovCuomo. Last month he announced hiring 500 new MTA cops: “A rider has a right not to be harassed, to be threatened, to be subjected to intolerable conditions.” Who would have thought militarizing police in the subways would produce this exact result? https://t.co/VCOkprQQbn

This man didn’t pay his subway fare—but is tackled by at least ten officers in a crowded station.

Officers should be working to deescalate—not putting dozens of lives at risk over $2.75.
pic.twitter.com/JCbY4L5AIi

Protesters on Friday attacked both the violence in the transit system and the program that appeared to increase the likelihood of conflict.

Hundreds of ppl are marching through the streets in Brooklyn right now against the NYPD’s treatment of black kids on the subway pic.twitter.com/CendPEwaWO

They took their march into the subway station pic.twitter.com/Wx7p565vMO

The entire platform has been taken over pic.twitter.com/auI3EzWIL7

There were no arrests reported by late Friday night.

No Arrests After California Halloween Shooting Kills 5 At Airbnb Home

This time, Southern California was prepared for wildfires. Here’s how countless homes were saved