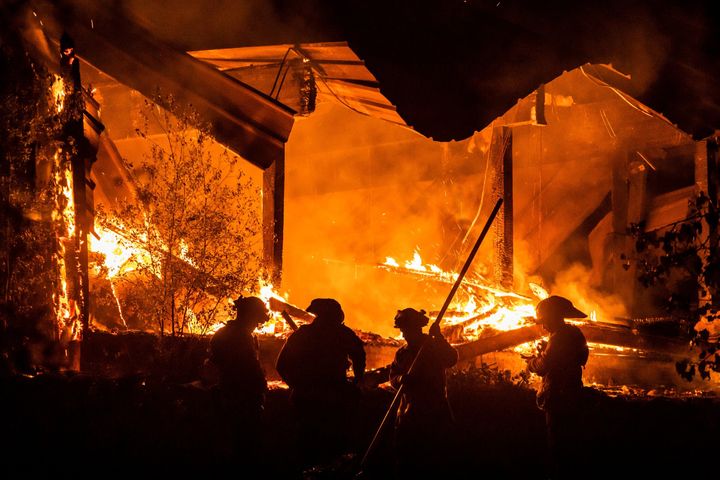 While thousands of firefighters made progress on the two most urgent blazes burning up California on Tuesday night, a third one that swelled to over a thousand acres in a populated area on Wednesday morning underscored the relentless nature of the state’s wildfire nightmare.

In Southern California, where the Getty and newly ignited Easy fires blazed, strong Santa Ana winds were creating “extreme fire weather,” according to the National Weather Service. And in the northern part of the state, where the massive Kincade fire continued to grow in Sonoma County’s wine region, a “red flag warning” remained in effect as “very dry air” threatened to fuel existing and any new fires.

All told, nearly a dozen major blazes were burning across the state on Wednesday. The challenging weather conditions stifled efforts to contain them.

Good-morning from the #kincadefire Crews are briefing on todays operations. pic.twitter.com/u5RuW9AFqS

Around a million Californians were facing blackouts on Wednesday as utilities have cut power in an effort to prevent further fires. On Tuesday, Pacific Gas and Electric cut power for a second time in a week in Northern California, leaving about 365,000 households there in the dark as of Wednesday morning. That figure included over a quarter of the 973,000 people whose electricity was cut over the weekend and still not restored by midweek. In Southern California, SoCal Edison said nearly 70,000 households were without power.

As fires spurred mandatory evacuations for nearly 150,000 people in the northern part of the state and more down in the south, over 2,400 evacuees ended up in Red Cross and other shelters on Tuesday night.

Here are the latest updates on the fires burning across the state.

A week into the Kincade fire in Sonoma County, the blaze continued to grow, reaching nearly 77,000 acres as of early Wednesday. While it had destroyed over 200 buildings, the more than 5,000 firefighters battling the blaze made some headway and it was about 30% contained.

Some evacuated areas on the coast were downgraded to “warnings” on Tuesday, allowing some residents back in. But nearly 150,000 people were still under mandatory evacuation near the fire, with another 30,000 or so under evacuation warnings.

Survivors of the deadly Sonoma fires of October 2017 say they’re reliving a nightmare.

“There’s no sleep. The stress and anxiety are overwhelming. The constant thoughts of what happened two years ago just keep coming up,” Mellissa Edney, who lost her home in Santa Rosa in 2017, told HuffPost earlier this week. She’d just moved into a newly rebuilt house last week, with her husband and two daughters, ages 1 and 3, when the fire hit a 30-minute drive away. “I can’t go through this again. I just can’t,” she said.

Officials managing the Getty fire had warned on Tuesday that damaging wind gusts would approach the area that night. On Wednesday morning, the National Weather Service issued a rare “extreme red flag warning” for Los Angeles and Ventura counties because of the 50-70 mph winds expected to swoop through the burning area that afternoon.

The Easy fire is burning near the Ronald Reagan Presidential Library, home to a vast collection of artifacts from his years in office and beyond. The 125,000-square-foot structure has not sustained any damage from the fire yet.

Meanwhile, the Getty fire has grown by nearly 100 acres since Tuesday. So far, 12 homes have been destroyed and five others have sustained some damage, Los Angeles Fire Chief Ralph Terrazas said at a Wednesday morning press conference.

Officials have confirmed that the Getty fire was caused by a tree branch that broke off and landed on nearby power lines during high wind conditions, sparking and igniting nearby brush.

“It’s important to note that while we’re standing here in an area where there’s only a light breeze, there are heavy gusts of wind that are expected at any moment, and in fact are occurring in places like Simi Valley,” he said, referencing the nearby Easy fire.

Terrazas said officials are probably still “a couple days out” from letting people who fled the Getty fire return to their homes. “Tonight does not look good” given the ongoing winds, he added.