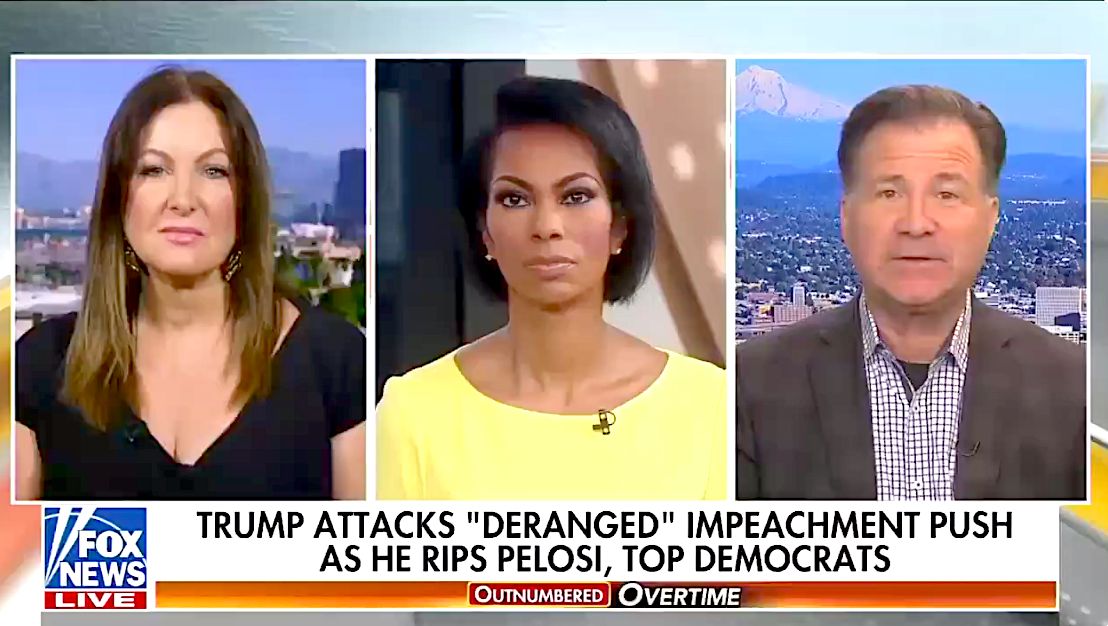 “Speaker Nancy Pelosi is trying to impeach him,” Kennedy had declared at the rally, standing next to the president. “I don’t mean any disrespect, but it must suck to be that dumb.”

On Thursday’s Fox News segment, Larson trashed the impeachment inquiry and the testimony of William B. Taylor, U.S. ambassador to Ukraine, discrediting his hours of specific and detailed under-oath testimony to House investigators as “third-hand” information.

“I would join him in that, actually,” Larson replied.

Marshall was then given an opportunity to contribute her opinion.

“In addition to my finding it to be sexist, I find it to be unprofessional,” she said. “The name-calling, whether it’s from the left to the right or the right to the left, it just brings down and lowers the bar of decency in our nation.”

Marshall also said it was inappropriate for a senator to call the House speaker “dumb” because he doesn’t agree with her opinion, and she defended Pelosi for simply doing her job.

Larson’s response was not tolerated by Faulkner:

Lars Larson: “I know dumb men and I know dumb women, and I probably will meet some dumb people with pronoun names, too.” pic.twitter.com/SPeml8eGsM

“It’s not sexist. I know dumb men and I know dumb women, and I probably will meet some dumb people with pronoun names, too. It’s not a sexist term,” Larson replied.

Faulkner later curtly replied: “This conversation devolved. We don’t put down people who use different pronouns on this network, on this show especially.”

“Leslie, I’ll give you the last word,” Faulkner concluded, “and we’ll move on.”

The full segment can be viewed below: