Get a first look at the new luxury electric SUV 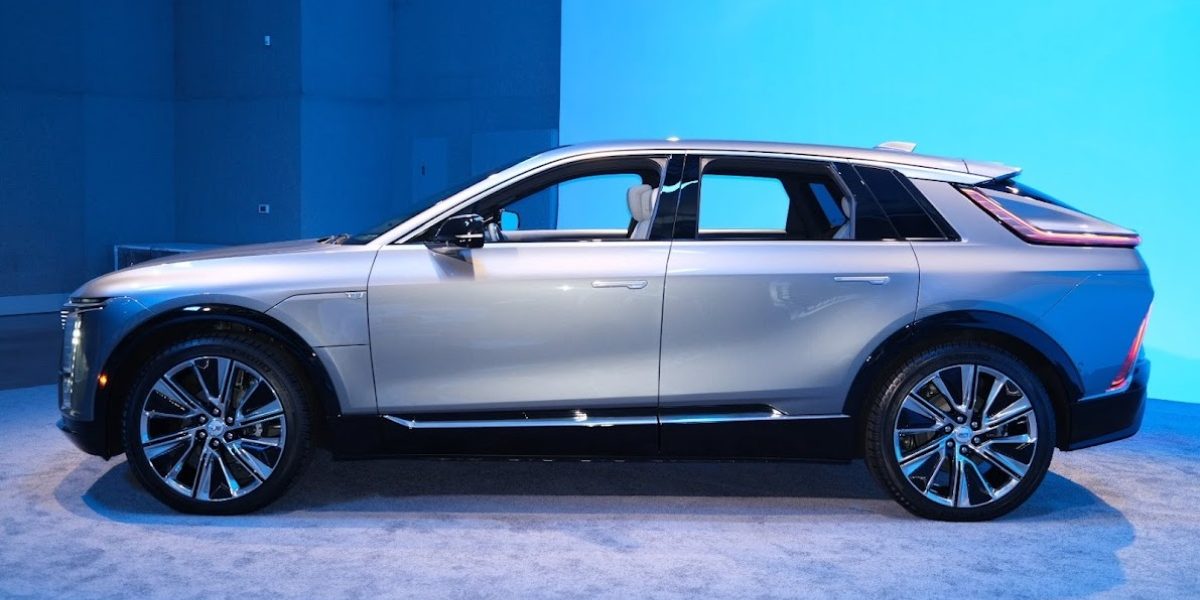 From the inside out, designers took advantage of GM’s new flexible Ultium battery to craft the 2023 Cadillac Lyriq, Cadillac’s first all-electric SUV.

The new battery with lithium-ion cells that stack vertically and horizontally meant the luxury car could be as big, as wide, and as low as designers craved. It set the stage for the Lyriq’s knockout 22-inch wheels, massive 33-inch driver display, and other interior details like ample legroom in the back and even the design of the HVAC vents. Besides the fresh battery tech, the Lyriq sports GM’s hands-free driver assistance system, Super Cruise.

“We finally got a platform to do all the things we wanted to do,” said Andrew Smith, executive director Cadillac Design, on Monday at a first look event for the Lyriq in Los Angeles. This was the first time press could see and sit inside a pre-production model of the vehicle, which prior to this week had only been displayed in company materials and splashy Super Bowl commercials with Will Ferrell and Timothée Chalamet.

The Lyriq, which has an estimated 300 miles of range and starts at $59,990, is the first of many electric cars GM plans to release with its Ultium battery. GM expects to go all electric by 2035, and the Ultium battery is supposed to help drive that push. The grille of the 2023 Cadillac Lyriq lights up upon approach.
Credit: Brittany Levine Beckman / Mashable 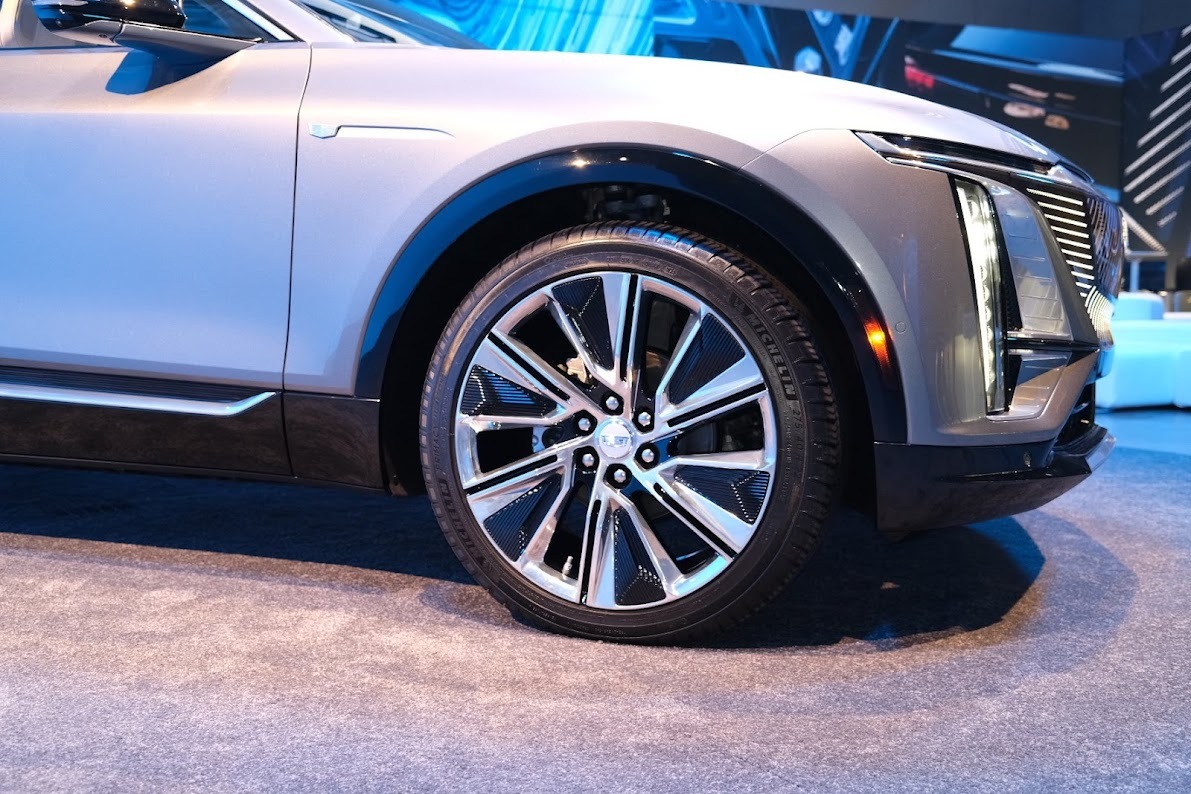 Cadillac designers knew they wanted to give the Lyriq big wheels for an athletic look.
Credit: BRITTANY LEVINE BECKMAN / MASHABLE 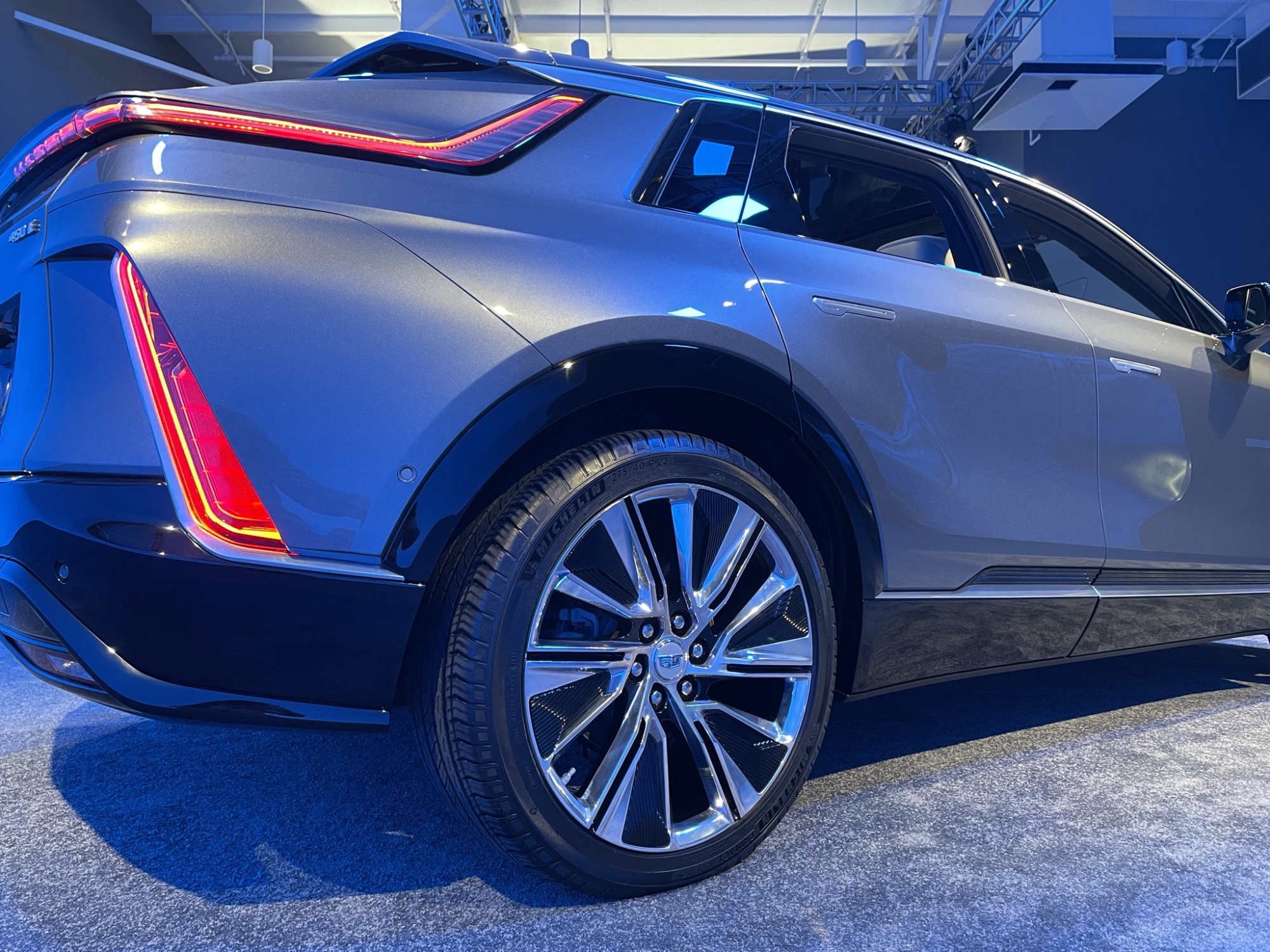 The Lyriq as seen from the back.
Credit: BRITTANY LEVINE BECKMAN / MASHABLE 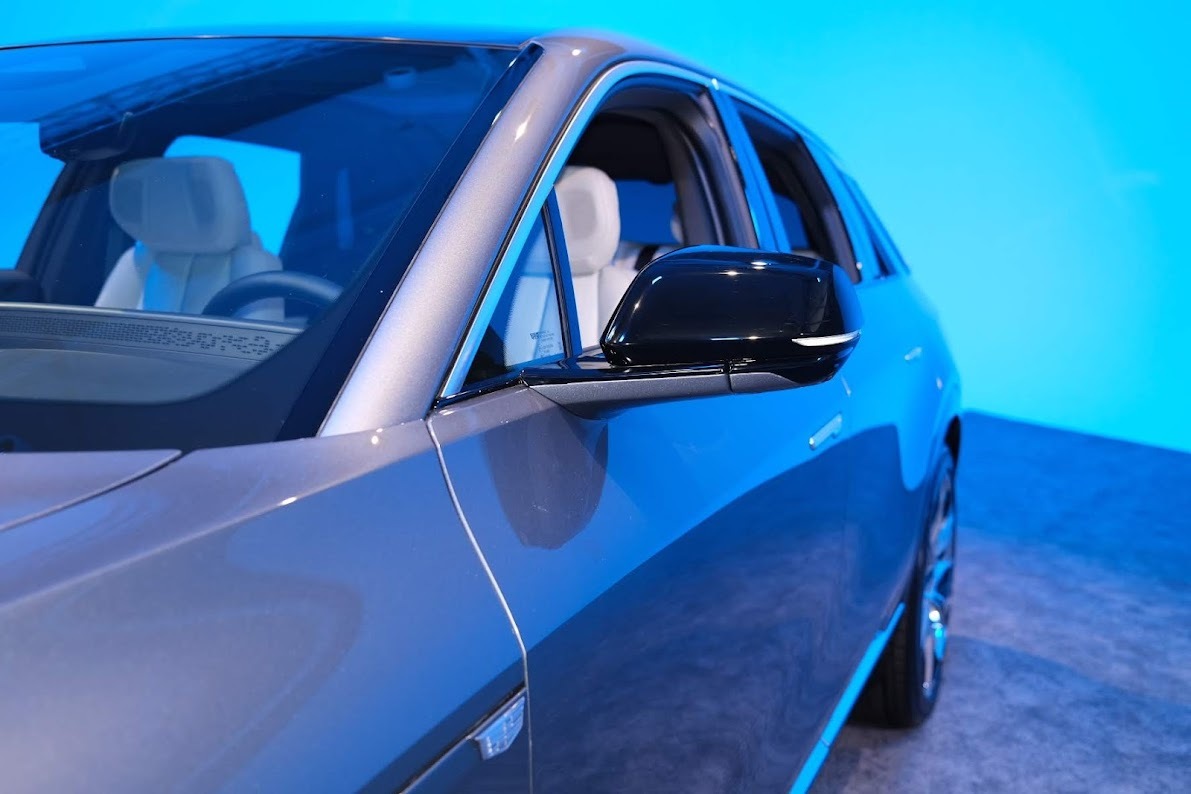 The door handles are flush and don’t pop out. When you press the handle, the door pushes out a few inches and then you push it open by grasping inside the car.
Credit: BRITTANY LEVINE BECKMAN / MASHABLE 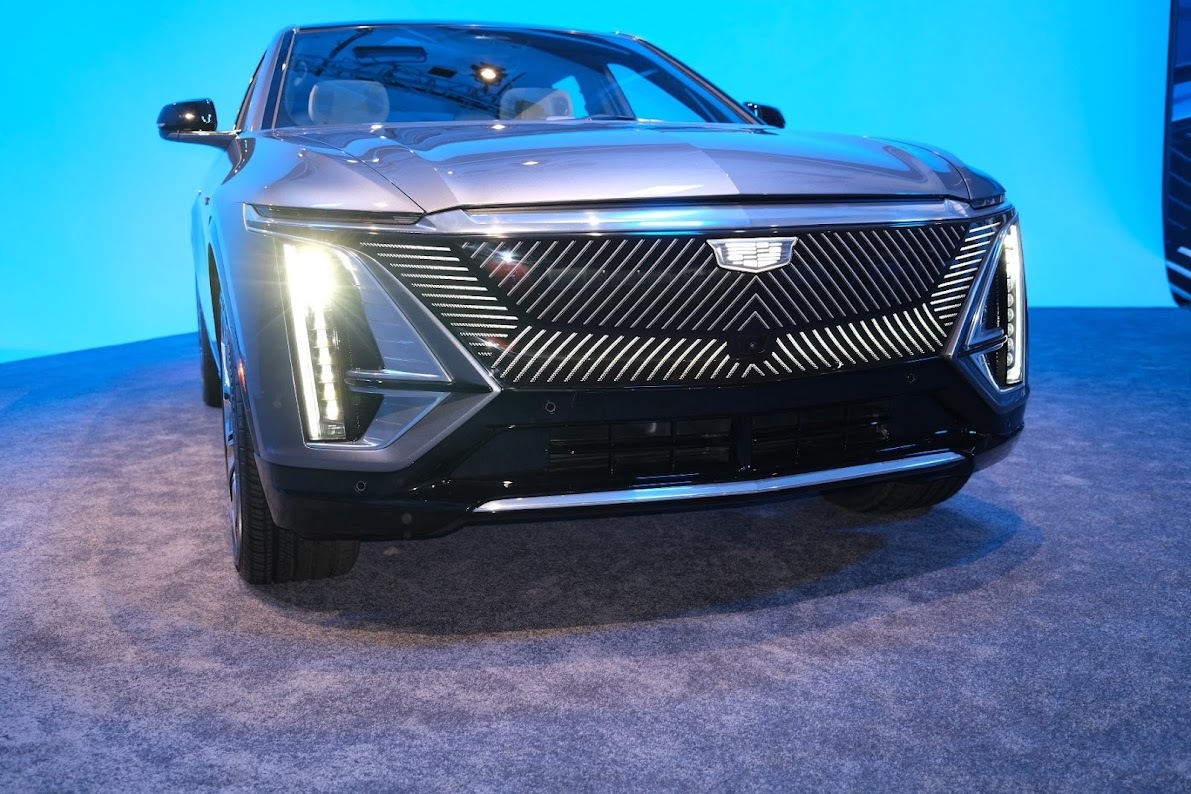 While the Lyriq is an SUV, it looks nothing like other members of the Cadillac SUV family, including the Escalade and XT5. Compared to its well-known cousins, the Lyriq is long and squat. It reminded me of my schnoodle, who has short legs and a long body. When asked why Cadillac went for a low-to-the-ground versus towering-over-traffic look of many SUVs, Smith was quick to respond.

“Because it looks awesome,” he quipped. He added the Lyriq’s design was a good place for Cadillac to start with its electric SUVs. If it wants to do a variant with a high, commanding chair in the future, it can, he added. 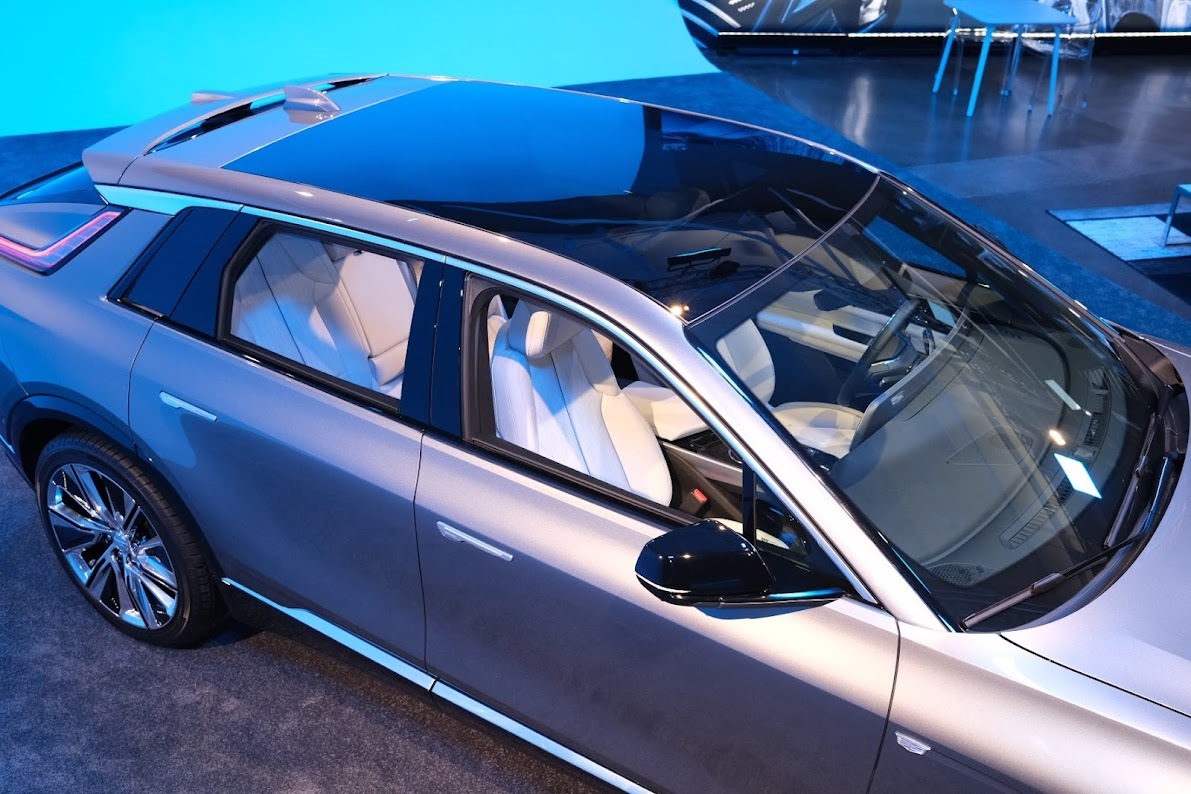 The 2023 Cadillac Lyriq from above.
Credit: BRITTANY LEVINE BECKMAN / MASHABLE Looking at the glass roof from the inside of the 2023 Cadillac Lyriq.
Credit: BRITTANY LEVINE BECKMAN / MASHABLE 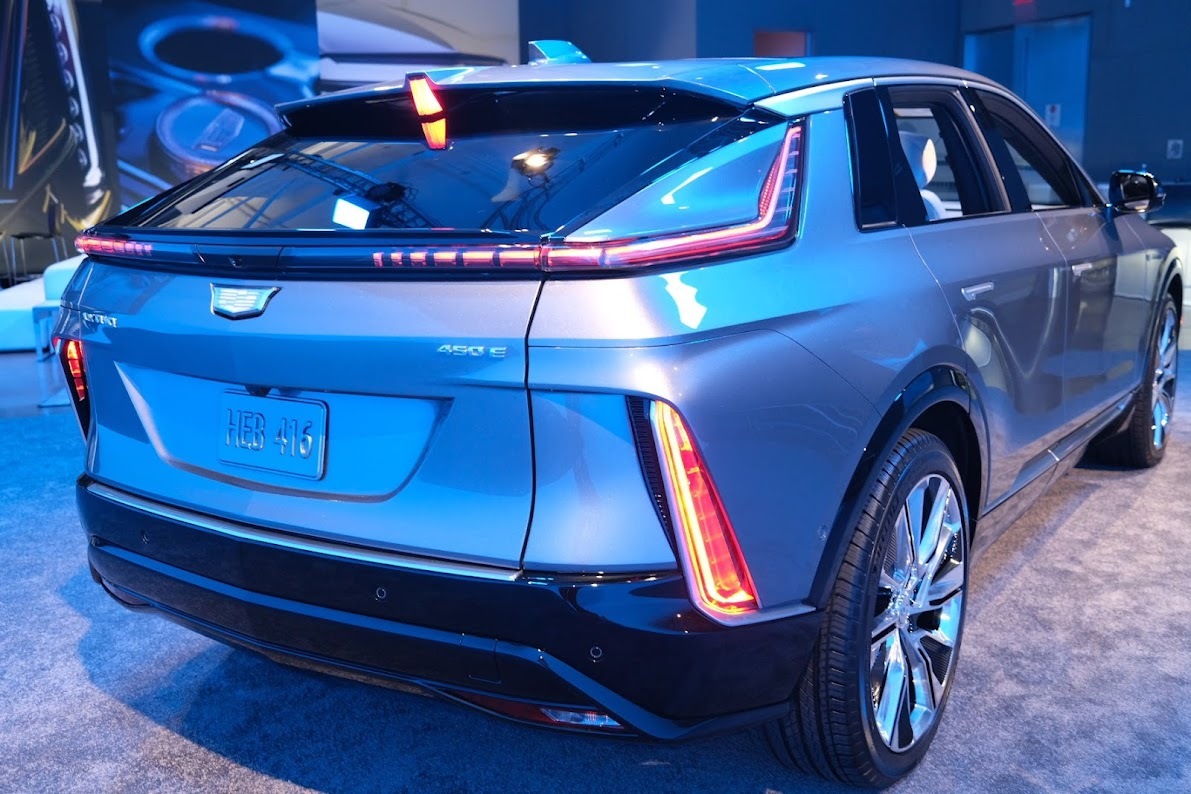 The 2023 Cadillac Lyriq doesn’t have a windshield wiper in the back. The car’s designed so that wind will force rain to slide off the back window as the vehicle moves.
Credit: BRITTANY LEVINE BECKMAN / MASHABLE 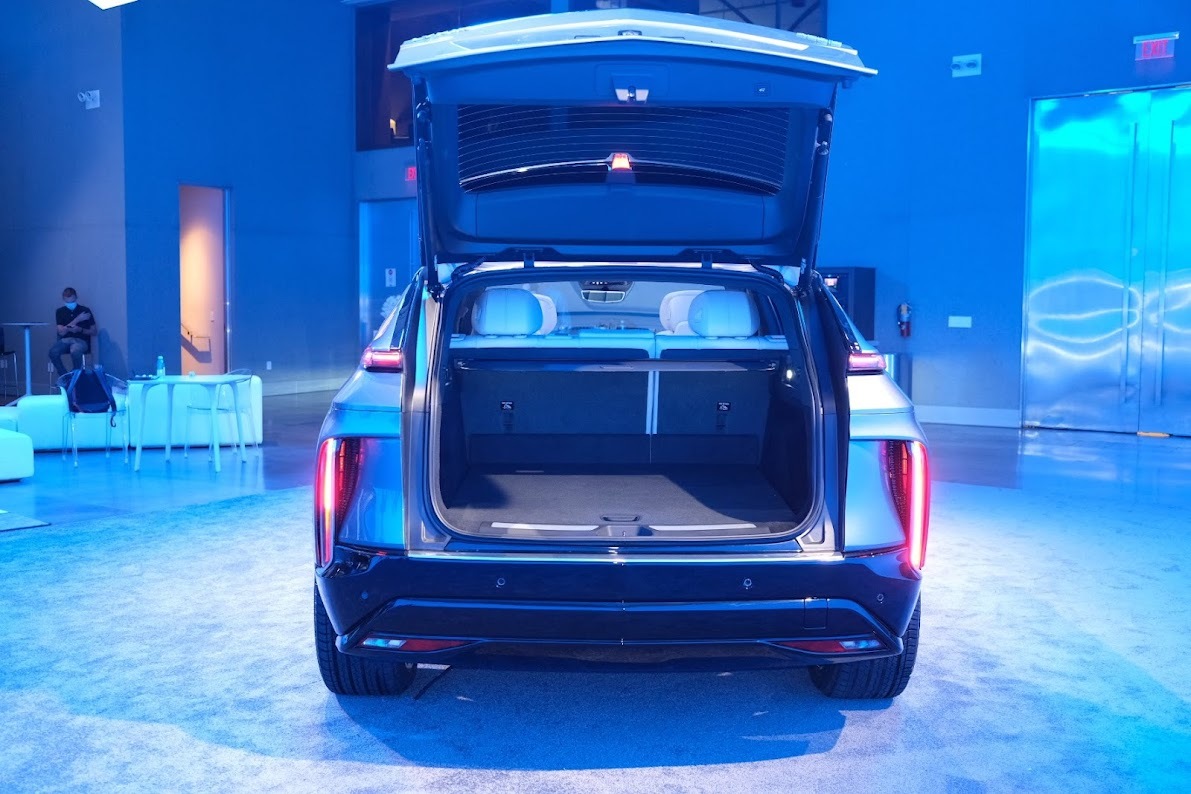 Crystal Windham, Cadillac’s interior design director, noted that the roughly 35-inch wide and five-inch tall display behind the steering wheel was designed with Super Cruise in mind. While the five-seater is braking and changing lanes for you and your hands are off the wheel (but your eyes are still on the road), you can use Apple CarPlay or Android Auto apps through touch, voice commands, or a knob near the cupholder on the right-hand side. Touch won’t work on the screen directly behind the wheel, but it will on the left and right. Both Apple CarPlay and Android Auto work wirelessly. 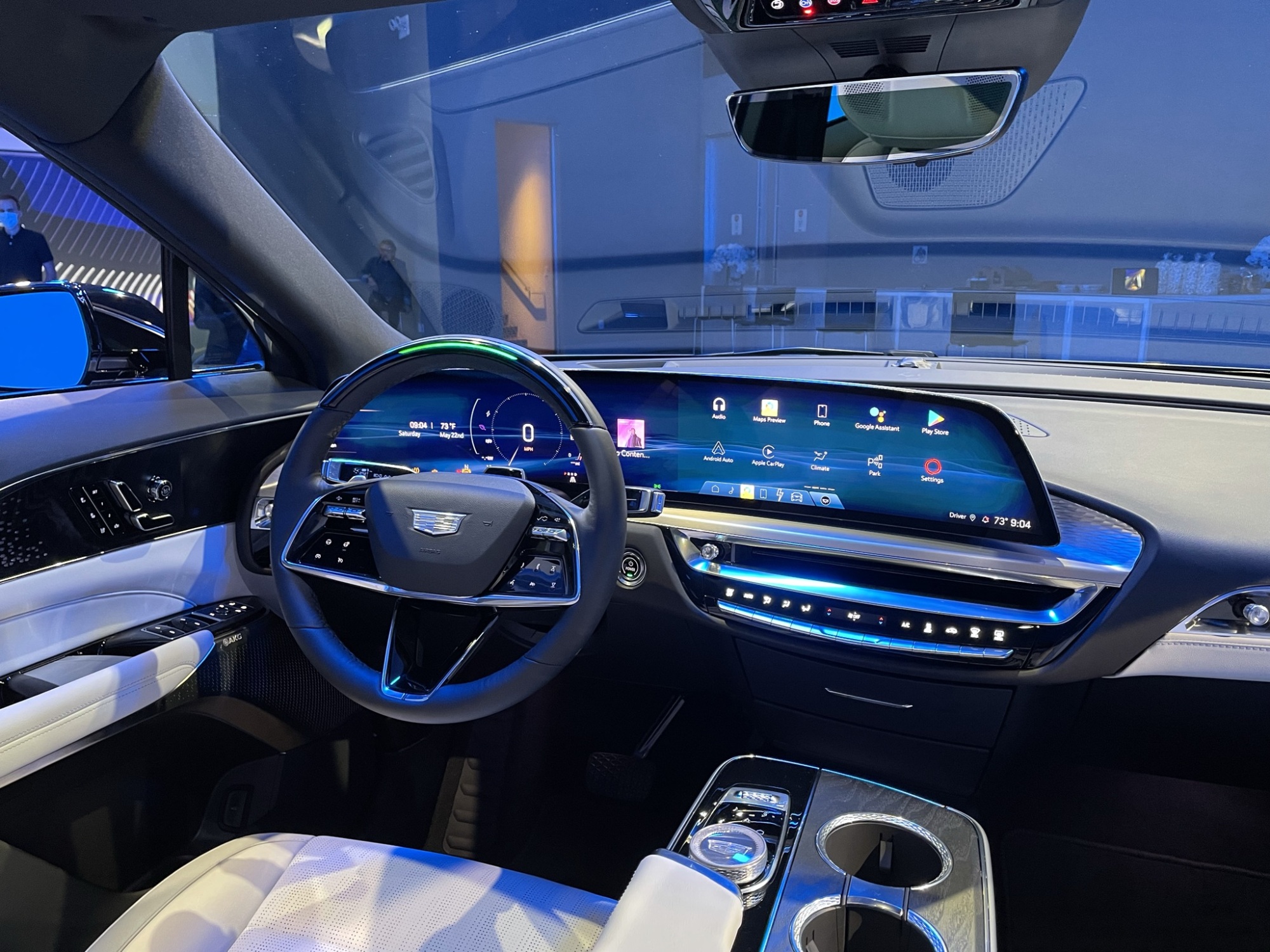 The Lyriq isn’t the first electric car to put a massive display behind the wheel. The 2022 iX, BMW’s new all-electric SUV, also has a display that’s slightly less wide at about 27-inches when you add up its dual screens. The 2022 Lucid Air sports a 34-inch display, and Mercedes is trumpeting its 56-inch so-called “hyperscreen” for the 2022 EQS electric sedan.

Like with other GM vehicles with Super Cruise, the driver assistance feature that can change lanes for you will only be available as part of your initial purchase for three years, after which point owners will have to pay a $25 monthly subscription fee. Gah, annoying!

Smith said this was to cover the costs of keeping the system up to date for safety reasons. Super Cruise uses a mix of sensors, onboard mapping software, and satellite tech to run. (Tesla is also going the subscription model with its Full Self Driving system, which is run on cameras, sensors, and the car’s computer. You can eventually either pay Tesla $10,000 upfront for the hands-free automated feature or a to-be-determined monthly fee.)

But back to the Lyriq’s battery: Ultium is an exciting prospect, but another GM brand, Chevrolet, is currently dealing with its own battery headaches for the Bolt, another all-electric car. Bolts from 2017-2019 have been recalled not once, but twice, due to risk of fire, costing GM $800 million. (I used to own a Bolt and recently got it repurchased because the first recall fix was taking months.) The new 2022 Bolt and crossover Bolt EUV didn’t get Ultium batteries, but Chevy has reportedly indicated they will in 2023 and 2024, respectively.

The 100 kwh battery in the Lyriq can add 76 miles of range in about 10 minutes with DC Fast Charging, aka a Level 3 charger, according to Cadillac. By comparison, the BMW iX is supposed to net 90 miles and comparable Teslas add about 100 miles after 10 minutes of fast charging.

Battery innovation — which will lead to longer ranges, faster charging, and original designs — will be the name of the game as car companies compete in the growing EV marketplace.

Beyond the Ultium battery, the Lyriq has other bells and whistles, too. Cadillac estimates it has 340 horsepower and 440 nm of torque. When you approach the car with the key, you’ll get a light show on the grille. The car handles are flush against the body and don’t pop out. Instead you press them and the door shoots open a few inches with a subtle robotic zhroom sound. You open the door all the way by putting your hand inside the car and pulling outward.

Keep in mind, we only got to see a pre-production vehicle and didn’t test drive the car. The Lyriq is on track to go into production in the first quarter of 2022 at GM’s new Spring Hill, Tennessee factory still under construction. Cadillac plans to have Lyriq on sales lots within the first half of next year. Reservations for the 2023 Cadillac Lyriq open on Sept. 18, 2021.