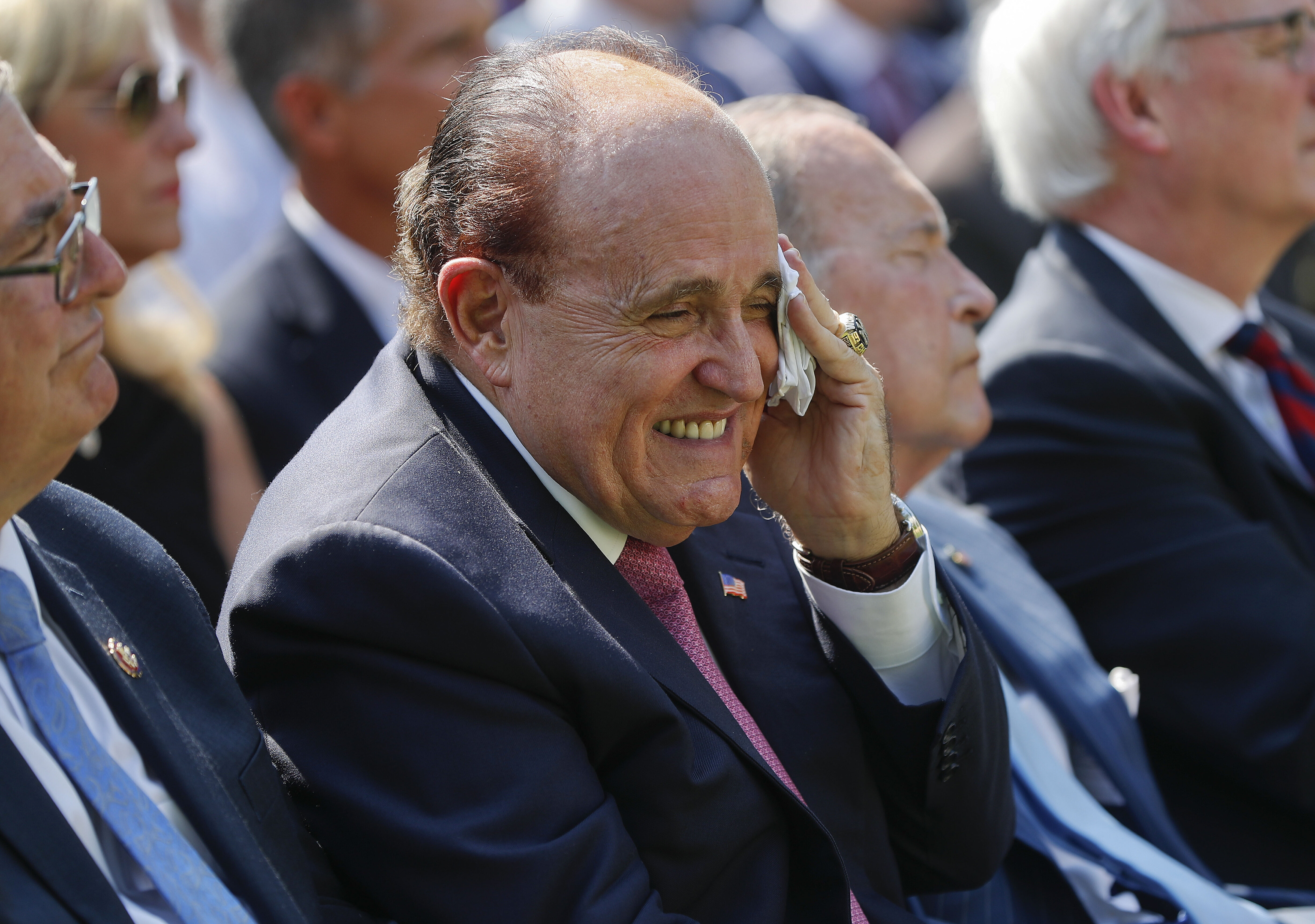 Rudy Giuliani, a personal lawyer for U.S. President Donald Trump and a central figure in a congressional impeachment inquiry, has hired lawyers to represent him as prosecutors examine his interactions with two men arrested on campaign finance charges.

Parnas and Fruman were arrested in October on charges of illegally funneling money to a pro-Trump election committee and other political candidates. They have pleaded not guilty.

Giuliani has not been accused of criminal wrongdoing.

He is central to a Democratic-led U.S. House of Representatives impeachment inquiry into whether Republican Trump abused his office for political gain.

The investigation I conducted concerning 2016 Ukrainian collusion and corruption, was done solely as a defense attorney to defend my client against false charges, that kept changing as one after another were disproven.

The evidence, when revealed fully, will show that this present farce is as much a frame-up and hoax as Russian collusion, maybe worse, and will prove the President is innocent.

The inquiry is focused on a July 25 phone call in which Trump asked Ukrainian President Volodymyr Zelenskiy to investigate former U.S. Vice President Joe Biden and his son Hunter, who served as a director of the Ukrainian energy company Burisma.

In a transcript released on Wednesday of testimony here by Bill Taylor, the top U.S. envoy in Ukraine, Giuliani was mentioned 68 times. At one point, Taylor spoke of when it became clear a meeting between Zelenskiy and Trump was conditioned on investigations of Burisma and alleged Ukrainian influence in the 2016 elections.

“It was also clear that this condition was driven by the irregular policy channel I had come to understand was guided by Mr. Giuliani,” Taylor testified.

For nearly a year, Giuliani has pursued unsubstantiated allegations that Biden pushed to fire a Ukrainian prosecutor to stop him from investigating Burisma. Giuliani has said Parnas and Fruman assisted him in this effort.

Giuliani also told Reuters he played a role in the effort to remove Marie Yovanovitch, the U.S. Ambassador to Ukraine recalled in May.

“You can knock yourself out looking at everything I do and I do not break laws,” Giuliani said in an Oct. 14 interview.

Giuliani tweeted on Wednesday that the investigation he conducted into what he called Ukrainian collusion and corruption was in defense of Trump, who he said was wrongly accused of colluding with Russia to influence his 2016 election.

A spokesman for the Manhattan U.S. Attorney’s Office declined to comment. Creizman confirmed he was representing Giuliani. Costello did not immediately return a call for comment.

According to his firm’s website, Costello served as the former deputy chief of the criminal division for the U.S. Attorney’s Office in the Southern District of New York, which brought the charges against Parnas and Fruman. Giuliani led that office from 1983 to 1989.

Parnas and Fruman are accused of using a shell company to donate $325,000 to the pro-Trump committee, America First Action, and raising money for former Texas Congressman Pete Sessions as part of an effort to remove the U.S. ambassador to Ukraine.

Giuliani told Reuters in October that he was paid $500,000 to provide business and legal advice to Fraud Guarantee, a company Parnas co-founded.

Giuliani has said he had no involvement in the flow of money at the heart of the indictment of Parnas and Fruman.

As part of their impeachment inquiry, House Democrats have subpoenaed Giuliani’s communications in connection with his efforts to push the Ukraine investigation.

Trump has derided the congressional probe as a political smear, and Giuliani has said he would not cooperate.

Trump added Giuliani to his legal defense team in April 2018 in connection with the investigation by Special Counsel Robert Mueller into Russian interference in the 2016 election to undermine Trump’s Democratic opponent Hillary Clinton. Giuliani quickly went on a media blitz in defense of Trump. [nL1N21E0IV]

In March, Mueller determined there was insufficient evidence to establish a criminal conspiracy between Trump and Russia.

Costello told Reuters in March he had known Giuliani for 45 years. Last year, he asked him about the possibility of Trump pardoning Michael Cohen, the president’s former fixer and lawyer.

In an April 21, 2018, email that leaked, Costello told Cohen he could “sleep well tonight. You have friends in high places.”

Yet, Costello said in the March interview, Giuliani had shot down the idea of a pardon.

Cohen, 52, pleaded guilty in 2018 to directing payments of $130,000 to adult film star Stormy Daniels and $150,000 to Playboy model Karen McDougal to avert a scandal shortly before the 2016 presidential election. Trump has denied having the encounters more than a decade ago with Daniels and McDougal.