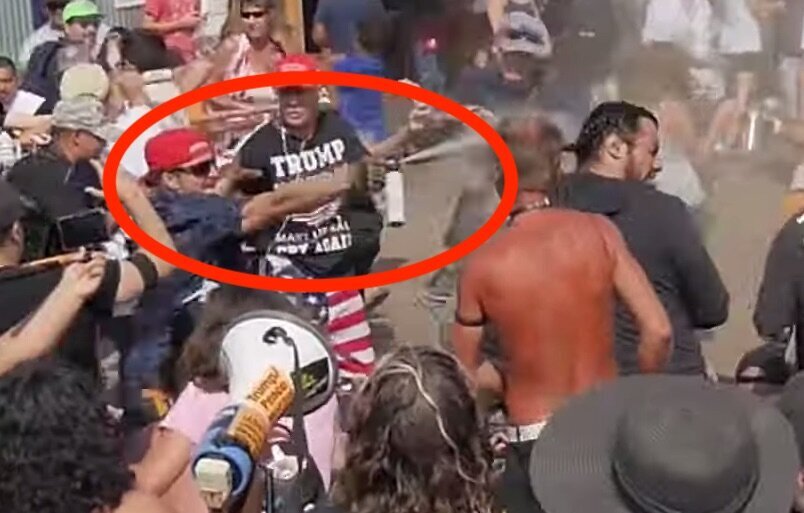 A man wearing a “Make American Great Again” cap was arrested on Saturday after allegedly spraying bear repellant into a crowd of people protesting against President Donald Trump at the Santa Monica Pier in California.

NBC Los Angeles said five people were treated on-site, but no one was seriously injured at the pier, which is a popular tourist attraction featuring shops, restaurants and an amusement park.

A police officer identified only as Sgt. D. Hicks told the Los Angeles Times the protesters were on the beach at first, but when they walked up onto the pier and encountered a group of Trump supporters, “everything went to crap.”

INSANE VIDEO: Police say a Donald #Trump supporter was arrested after spraying bear repellent on a small crowd protesting the president at the Santa Monica Pier

The footage was captured from several angles. One clip shows the suspect returning and appearing to spray again at someone who was already on the ground from the first dousing.

Bystanders brought the assailant to a police station, which was just steps away from the scene. KTLA identified him as 32-year-old David Nicholas Dempsey, who was booked on suspicion of illegal use of tear gas, assault with a caustic chemical and parole violations. The station said he was on parole from a weapons conviction.

Jail records from the Los Angeles County Sheriff’s Department show Dempsey was being held without bail. He’s due in court on Tuesday.

Police are working to identify a second man ― described as older ― who also may have sprayed into the crowd, The Los Angeles Times reported.

In footage from the scene Dempsey can be heard telling police he was “attacked” by “libtards” and “flag-burning commies.” The crowd cheered as he was cuffed.