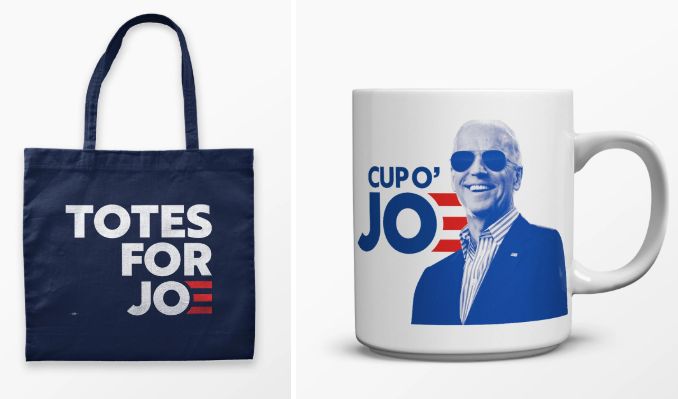 Running a presidential election is hard. But for some 2020 candidates, creating good swag appears to be even harder.

With more than 20 presidential candidates competing for your vote and your merch money, there’s a lot to consider ― and not all mugs, T-shirts, pins and bumper stickers are created equal.

Fortunately for you, we dug through the candidates’ ever-changing online stores to round up some of the best, worst and weirdest items up for grabs.

For supporters of former Vice President Joe Biden, or undecided lexophiles, what could go better than a “Cup O’ Joe” mug with your ― you guessed it ― coffee in the morning?

Biden’s team is hoping to swag out voters with this cleverly designed mug as well as a punny “Totes for Joe” canvas bag.

His latest collection also includes a T-shirt decorated with drums, captioned by one of his favorite tag lines: “Beat him like a drum.”

The campaign shop for Sen. Cory Booker (D-N.J.) is colorful and bold, with much his merch featuring his first name in red, bright blue and black. But outside of this flashy attire, one item that particularly stands out is a snarky sticker that targets rival Joe Biden.

It might raise an eyebrow, but the quote is real: Biden did accidentally refer to Booker as “future president” during a debate back in July. Booker’s campaign has gleefully run with it since.

Montana Gov. Steve Bullock may be a long shot Democratic candidate, but at least he’s got a decent looking T-shirt.

The design — which features a bull, a lock and his website — will help you easily remember his name. It’s simple, clever and straightforward. What more do you need?

“BOOT EDGE EDGE” ― a breakdown on how to pronounce his name ― is humorously spelled in all caps across hats, T-shirts and tote bags. The face of his husband, Chasten Buttigieg, is also seen stamped on one shirt that calls for “Chasten for first gentlemen.”

There is also a pack of buttons that showcase his two rescue dogs Buddy and Truman.

Julián Castro’s T-shirts are the frontrunners in his store.

The former Secretary of Housing and Urban Development has several colorful and eye-catching prints that highlight his Mexican-American heritage, including “Adios Trump” gear as well as a T-shirt — Lotería — that addresses him as “El Presidente.”

Former Maryland Rep. John Delaney may not be one of the campaign trail’s standout stars ― at least so far ― but his gear is definitely in a league of its own.

“Simply place one eraser beneath your pillow before falling asleep and by morning you’ll have forgotten all of the pain, invective, division, and incoherent ramblings of our 45th president. You’ll wake refreshed and ready to set about rebuilding America,” the item’s description reads.

Should that fail to work, his store also offers bottle openers and beer koozies.

Sen. Kamala Harris (D-Calif.) is also hoping to cash in on her political rivals, with T-shirts targeting Trump and Biden.

Her “Dude Gotta Go” tee illustrates her plan to oust Trump from the White House while her “That Little Girl Was Me” shirt highlights a debate exchange she had with Biden about his record on civil rights.

“You also worked with them to oppose busing,” she told Biden, “and you know, there was a little girl in California who was part of the second class to integrate her public schools and she was bused to school every day. And that little girl was me.”

Merch for Sen. Bernie Sanders (I-Vt.) is ready to help you show that you’re really “feeling the Bern.”

The senator’s campaign store has put the slogan on fanny packs and water bottles that feature a cartoon of Sanders wearing a red sweatband. Now you can “stay cool AND feel the Bern,” according to the water bottle’s description.

He’s also offering a T-shirt featuring a throwback photo: His “Protest Tee” shows his 1963 arrest at a civil rights demonstration in Chicago.

The president’s reelection campaign store packs no surprises but plenty of punches.

In addition to offering T-shirts that ridicule some of his critics — including Rep. Adam Schiff (D-Calif.) and Biden — his campaign is selling “recyclable” plastic Trump-branded straws because, according to the listing, “Liberal paper straws don’t work.”

There is also an abundance of drinking merchandise available, including pint glasses, red solo cups, plastic “stadium cups” and several styles of beer koozies ― some of which feature one of Trump’s many “no collusion” tweets.

Elizabeth Warren likes to say she has a plan. She also has some decent looking T-shirts.

The Massachusetts senator offers a range of empowering pro-women designs that challenge today’s political hierarchy and vow to “level the playing field.”

She is also putting her dog front and center, with her golden retriever Bailey featured on “Bailey for First Dog” bandanas.

“He’s a Very Good Boy, 15/10 in fact,” the product’s description reads. “Help make sure he gets to run laps on the White House lawn.”

If you were hoping to find crystals and dream journals in Marianne Williamson’s online store, you’ll be extremely disappointed.

The author, spiritual leader and activist does, however, have a range of beautifully designed pink and purple merchandise, including some bearing positive slogans like “Dignity. Decency. Democracy” and “Turn Love Into A Political Force.”

She also offers T-shirts and buttons adorned with a striking sketch of herself done by fashion illustrator David Downton, formerly of Vogue.

Andrew Yang is all about the numbers, and his merchandise is too.

The entrepreneur’s MATH slogan — which stands for “Make America Think Harder” — is widely featured throughout his campaign store on hats, T-shirts, pins and even a “Yang gang” bandana.

There are also Andrew Yang calculators, notebooks, folders and a faux dollar bill that serves as a reminder of his universal basic income plan to give each American adult $1,000 a month. If math and money aren’t appealing to you, he’s also not shy about showcasing his plan to legalize marijuana.

Don’t see your favorite candidate’s mech on the list? Check out their online shop (if they have one) to see why. If you spot an item we’ve missed, feel free to share it in the comment section.