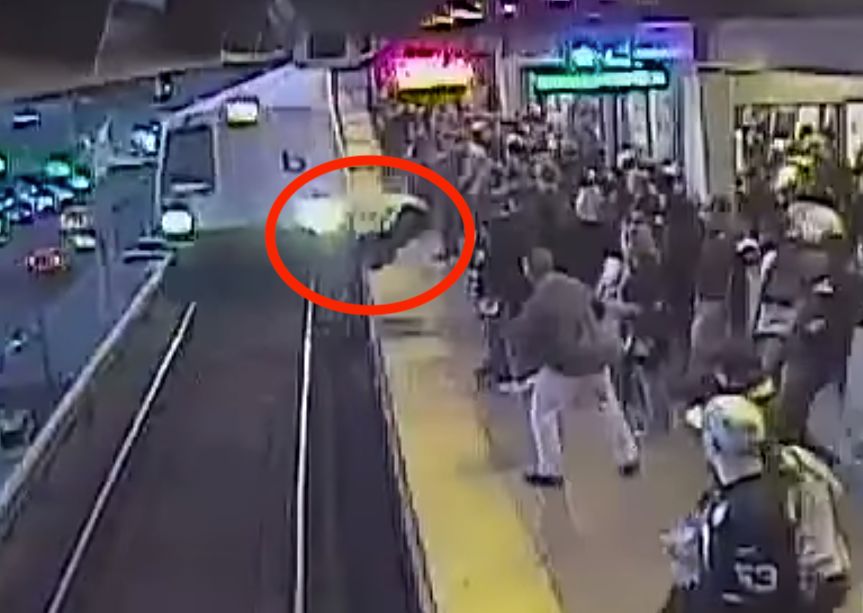 Dramatic video shows a Bay Area Rapid Transit worker pulling a man from the tracks as a train entered the Coliseum Station in Oakland, California, on Sunday evening.

Transportation supervisor John O’Connor hauled the unidentified traveler onto the platform, which was crowded following a Raiders game, with just milliseconds to spare.

The man was intoxicated and had stepped over the yellow safety line and dropped onto the tracks, according to a BART spokesperson. He was later taken to a hospital.

Check out the video here:

O’Connor then pulled the man up to his feet and the pair embraced in footage that is going viral:

Tonight we are thankful for John.
He’s a former Train Operator who was promoted to Transportation Supervisor. He was working the Coliseum Station for the Raiders game and saw someone on the platform who needed help. He saved a life tonight.
Thank you John.
Show him some love. https://t.co/BIb5NMdZFj

“I just remember just grabbing and pulling as hard as I could and rolling back,” O’Connor told the CBS-owned KPIX 5 station in the interview above.

“It was all slow motion,” said the father of three.

He played down being called a hero in a press conference on Monday.

“It’s really awkward to be called a hero,” he said. “That’s what we’re supposed to do. We’re all human beings and life is precious.”

‘Mistakes were made,’ Cyprus minister says on passports uproar