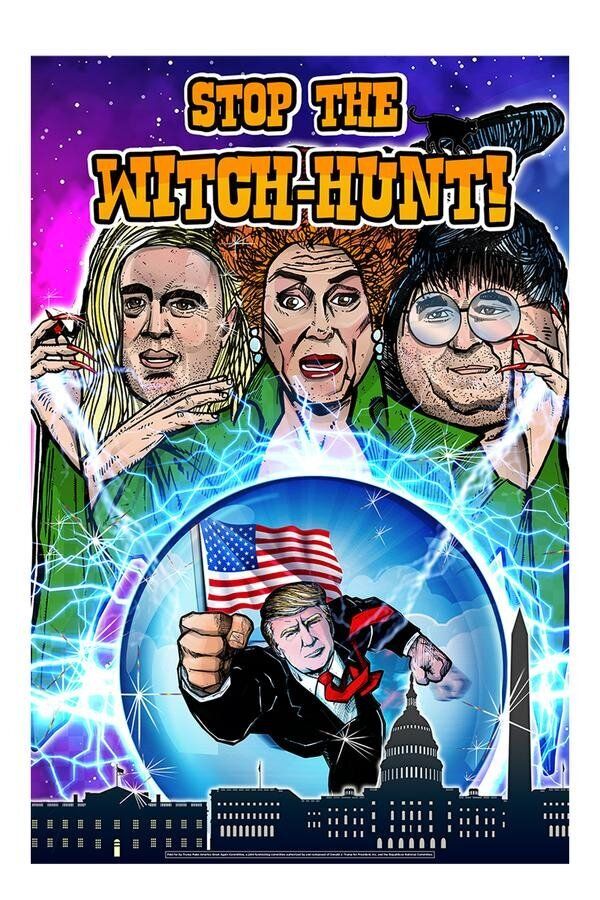 President Donald Trump’s campaign team is hawking what appears to be a ripoff version of the iconic “Hocus Pocus” poster.

And one of the movie’s creators is not happy, reported ET Canada.

“I am disgusted by this putrid act of evasion,” tweeted Mick Garris, a screenwriter on the 1993 fantasy comedy starring Bette Midler, Sarah Jessica Parker and Kathy Najimy.

As one of the creators of HOCUS POCUS, I am disgusted by this putrid act of evasion. This is the worst president in our history, and I object in every way his attempt to co-opt, no matter how poorly, our creation. Leave our witches alone, oh Evil One https://t.co/DUG8xop5jH pic.twitter.com/AmULVG4jR4

“This is the worst president in our history, and I object in every way his attempt to co-opt, no matter how poorly, our creation,” continued Garris. “Leave our witches alone, oh Evil One.”

It appears to show House Speaker Nancy Pelosi (D-Calif.), Rep. Adam Schiff (D-Calif.) and Rep. Jerry Nadler (D-N.Y.) as the witches attempting to attack Trump, who is seen flying over Washington with an American flag.

Just in time for Halloween!

Send a spooky message to Pelosi, Schiff & Nadler that Trump won and they should get over it!

And show support for the President at the same time!

“HOAXUS POCUS!” reads the description of the poster on Trump’s website.

“The Greatest Witch Hunt in the history of the USA continues,” it adds. “The only people scared this Halloween are Shifty Schiff, Nervous Nancy and Democrat Hack Jerry Nadler about their chances in 2020!” The design is also available on a t-shirt.

However, despite the spooky theme, “the item is not guaranteed for delivery by Halloween,” it states.