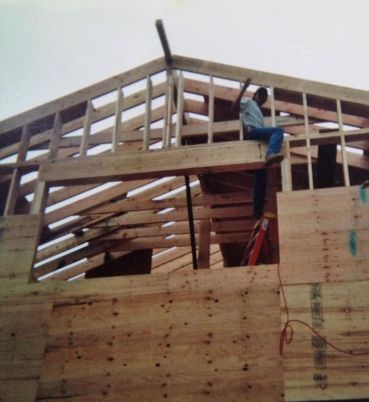 I moved to the United States from El Salvador in 2009, becoming one of the millions of undocumented people living in the shadows in this country. I did this to pursue my dream of learning English and going to college, something that was out of reach at home. I had extended family in New York City, and on my last visit, I decided to stay in the country.

While I can’t speak on behalf of the entire community, my story may help people understand what it’s like for undocumented workers in the U.S. and give a voice to those unable to talk about their experiences.

Over the course of four years as an undocumented immigrant, I worked as a dishwasher and then as a construction worker, assisting with new building projects and renovations on Long Island and in New York City — framing houses, installing roofs, laying concrete, painting, doing demolition, hauling trash, and placing crown molding, baseboards and trim. I found these jobs first through family and friends, and then through networking.

As an undocumented person, I was expected to be hardworking and fast, never complain, and get more done than my documented co-workers, who were mostly white.

When I first started working, I wasn’t very fluent in English but I knew enough to know that I was being treated differently than my co-workers who spoke more fluently than me. Those who were less fluent were also treated differently. When someone who wasn’t fluent tried to say something, our bosses would just make faces or call someone over to translate rather than try to understand what was being said.

I worked long hours — up to 12 per day — without any breaks and, worse, without getting paid for any time beyond an eight-hour day. A couple of times, people simply didn’t pay me for the days that I had worked. You may wonder why I didn’t speak up. The reason is that, at the moment, I was just grateful for the job(s) I had. I was making more money than I ever could have imagined making in my home country and I was happy to have work, even if it meant long hours, waking up at 4 in the morning and going to bed at 10 p.m.

At the time I was working, in El Salvador, the minimum wage was around $6 a day. Over these four years, I was making about $10 an hour — mostly in cash ― allowing me to pay rent, save and send money to my family back home.

In one instance, before Thanksgiving, my boss said that we were going to be paid time and a half for working on a major holiday. I was so happy since I had never been paid more for working on a holiday. But the following week, when I got my check, I noticed that my pay was the same as it had always been. When I asked one of my bosses why, he said that I should just be grateful that we had work at all that day. I was disappointed and wanted to confront them, but all I did was whisper “That’s not fair” and leave the room.

Minutes later, when I was getting ready to go home, I was called to the office and informed that there was no more work for me — I had been let go. After that, it took me several weeks to find a steady job again. The next time I noticed a discrepancy in my pay, I knew better than to say anything.

As an undocumented person, I was expected to be hardworking and fast, never complain, and get more done than my documented co-workers, who were mostly white.

As an undocumented worker, there’s always a fear of getting hurt on the job. One, because you’re not entitled to insurance benefits, so there’s the worry about the cost. Then there’s the risk of being discovered without papers and getting deported.

When I was working for a roofing company, I had to lift heavy buckets of trash on a daily basis, which eventually caused me to develop carpal tunnel syndrome. It got so bad that I had to have a minor procedure to alleviate the discomfort and pain. The whole idea of walking into a hospital or a clinic was terrifying to me, not just because I didn’t know the cost but because I didn’t want to jeopardize my stay in the U.S. One of my relatives recommended a nearby hospital that offered a low-cost program and did not inquire about people’s immigration status. I signed up for the program and was able to get the help I needed without disclosing that I was undocumented. I now know that a patient’s personal information is protected under HIPAA, regardless of where the person is from.

In my time in the United States, I’ve witnessed people crack jokes about undocumented workers being hauled off in ICE raids, like the recent ones that took place at the chicken processing plant in Mississippi. When I was working in construction in New York, one of my white bosses knocked on the door where I was working and said, “This is ‘la migra’” (slang for ICE) to be funny. What happened to those people detained in the raids could have happened to us at any moment. The fear of being caught and deported is real and is not funny.

There is a belief, popularized by Trump and his supporters, that people like me are here to steal American jobs. I don’t want to be ungrateful or throw anyone under the bus, but in my case, my employers either knew my status or didn’t ask. They didn’t fire someone to offer me a job — they were in need of workers. I never took anyone’s job.

Immigrants aren’t the problem. There’s a demand for labor, and we come here to meet the need. That’s why this country needs comprehensive immigration reform to fix the problem.

I am grateful that as an undocumented worker I met amazing people who are caring and hardworking and who I can now call my friends. I am grateful to all my family who supported me each step of the way, to the good bosses I had who made me feel appreciated, and for all the jobs I had where I was able to learn new skills that are to this day so useful.

After four years of being undocumented, I was able to gain legal status in the U.S. by marrying my wife — who is a citizen ― graduate from college, and start working in the hospitality and tourism industries and in operations for a tech startup. Now that I have a college degree and I’m also a citizen, I’ve been able to work for globally recognized entities, the 9/11 Memorial Museum, One World Observatory, Holiday Inn, the New York City Marathon, Heal and more ― all places where my skills and language abilities have been valued and where I’ve been able to grow and lead teams.

Two years ago, when I was at the ceremony to become a U.S. citizen, I was overcome with feelings — happiness, relief, optimism, and, at the same time, sadness for all my fellow undocumented peers who also deserve to be in this country, out of the shadows and living free of fear, but have not yet been given a path.

José Mendoza has had many careers: dishwasher, construction worker, hospitality and tourism professional, and startup operations manager. When he’s not working, he enjoys traveling, making pupusas and running.

Do you have a compelling personal story you’d like to see published on HuffPost? Find out what we’re looking for here and send us a pitch!

Next week’s Arctic blast will be so cold, forecasters expect it to break 170 records across US

Donald Trump Jr. Likens Sacrifices Of Fallen Troops To Those Made By His Family