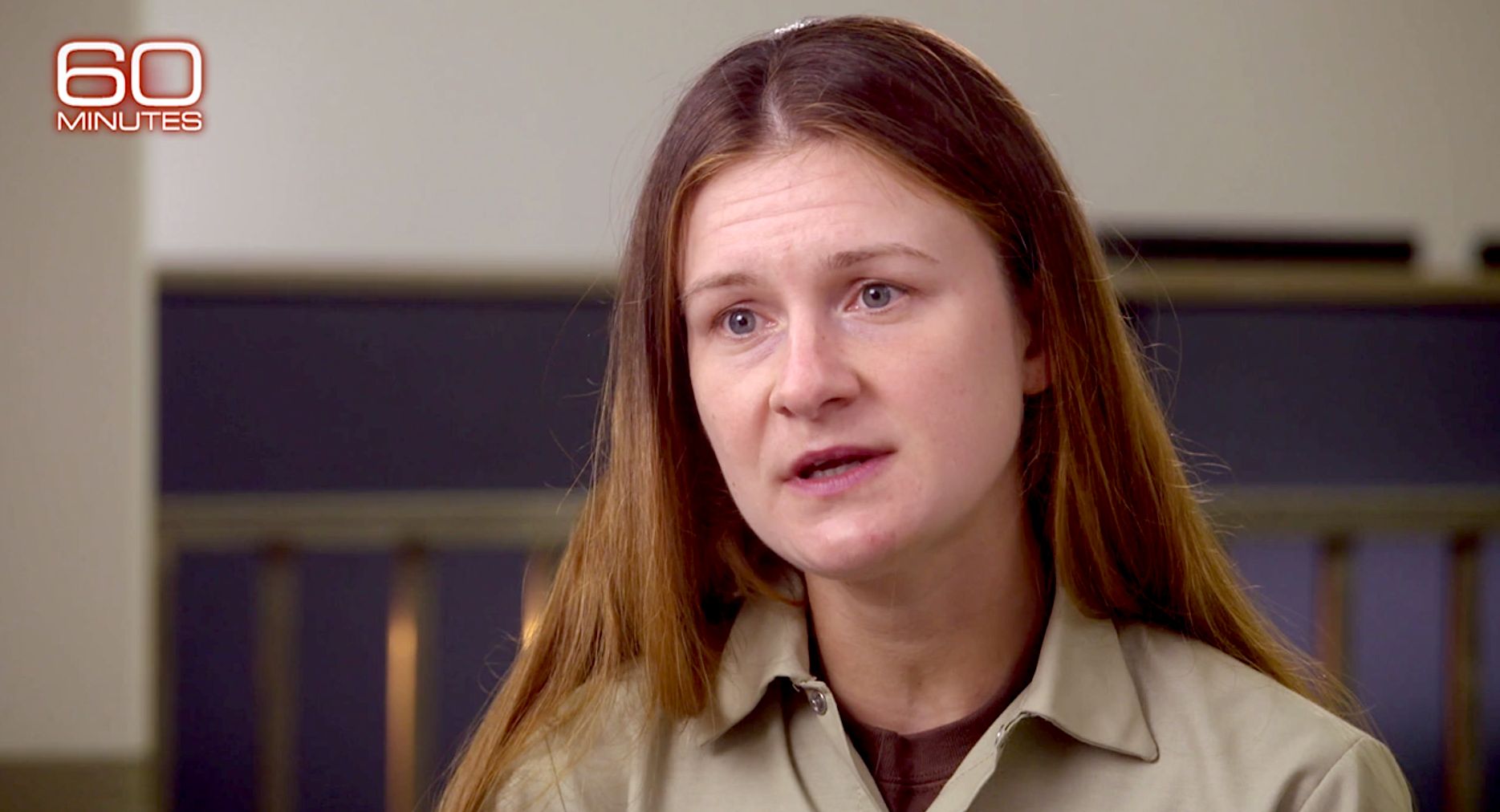 Maria Butina, the Russian gun rights activist who became entwined in GOP politics during the 2016 presidential election and pleaded guilty last year to conspiring against the U.S. by acting as unregistered agent of the Kremlin, insisted in a new interview that she was not a spy and never attempted to influence American politics.

Butina, in an interview with CBS News’ “60 Minutes” ― her first with U.S. media since she was incarcerated in a Florida federal prison — was filmed while the 31-year-old was still behind bars. She was released late last month after serving 15 months of her 18-month sentence and was immediately deported to Russia. Photographs at Moscow’s Sheremetyevo airport showed a beaming Butina clutching a bouquet of flowers, flanked by supporters and her dad.

Butina, the first Russian national convicted for seeking to influence U.S. politics during the 2016 election, arrived in the U.S. in 2014 to attend conventions hosted by the National Rifle Association. American prosecutors claimed Butina hid her true identity as a Russian agent and attempted to infiltrate the NRA to influence the GOP.

But Butina, speaking to “60 Minutes” host Leslie Stahl, slammed these accusations as “nonsense.”

“I never sought to influence your policies. I came here on my own because I wanted to learn from the United States and go back to Russia to make Russia better,” she said in the interview, which aired Sunday.

Before she was deported to Russia, Maria Butina spoke to 60 Minutes about charges that she sought to influence U.S. policy for the Kremlin. See the full interview, Sunday at 7:30 p.m. ET and 7 p.m. PT on CBS https://t.co/w3WmHBE76M pic.twitter.com/CGIWkRBluB

But according to Butina, she was merely engaging in “social networking.”

“Maria is not a spy. She knows of no secret codes,” Butina’s attorney Bob Driscoll told “60 Minutes” in a statement. “There were no safe houses. In other words, she was completely open and there was no espionage.”

When questioned about a message she’d sent to Russian official Alexander Torshin ― who Butina has previously admitted to working for ― about allegedly having influence over at least one of President Donald Trump’s Cabinet choices, Butina deflected blame.

“John Bolton will be secretary of state, 90%,” Butina wrote to Torshin in the weeks after Trump was elected. “Ask our people if they’re happy with that. Our opinion will be taken into account.”

Butina told Stahl that her former boyfriend and Republican operative Paul Erickson had directed her to write that message.

“I hesitated to write that, but I thought it might — you know, it was a certain way to show off to Torshin and say, ‘Well, maybe I have high-level contacts here,’” she said.

Erickson was reportedly a target of federal investigators in the Butina case, but was never charged. He was charged with 11 counts of fraud and money laundering in a separate federal indictment earlier this year related to three of his business ventures. He pleaded not guilty.

“How can one judge me and say, what, I was too smart for my age?” Maria Butina responds to questions about how a 23-year-old from Siberia staged gun rights rallies and then held a conference that brought NRA members to Moscow. https://t.co/084FdyCQKQ pic.twitter.com/t3EQgrta6d

John Demers, the assistant attorney general for national security, told Stahl that Butina’s interview with “60 Minutes” ― which the Justice Department recorded and reviewed ― was a “masterpiece of disinformation.”

“When she was talking to you in your interview, her audience wasn’t the American people. It was Vladimir Putin and all the people in Russia who are going to decide her fate when she goes back there,” Demers said.

He added: “I have very little doubt that the Russian government will leverage [Butina] as an instrument of propaganda to say: ‘Here was this poor, young, idealistic Russian student and look what happened to her. They threw her in jail for 18 months.’”

As “60 Minutes” noted, Butina has already spoken with several Russian news outlets since her return to Russia about her ordeal in America, including over 100 days in solitary confinement.

“I don’t know why they had to be so cruel,” she told Russia’s state-owned media outlet RT of her time in solitary confinement. “I tend to think – this is just conjecture – that maybe they were trying to break my will or something like that, learn some secrets. But I didn’t have any secrets.”