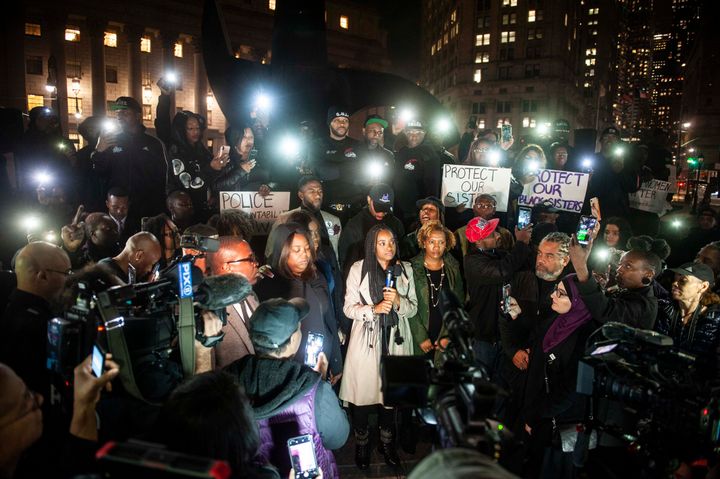 NEW YORK ― On a mild fall evening, two strangers bound together by unimaginable tragedy at the hands of those sworn to protect and serve met for the first time in Manhattan.

Ashley Carr and Alissa Charles-Findley never wanted the spotlight. But their families were thrust into it when Texas police officers, in separate incidents roughly a year apart, opened fire on their siblings in their own homes.

In the days and weeks that followed, each woman, like so many other members of Black families who have been victimized by systemic police brutality, would join the frontlines of a national movement they had once supported from a distance.

Hours after their first meeting, Carr and Charles-Findley stood beside each other in Foley Square as keynote speakers at a National Day of Outrage protest against police violence. It was Carr’s first rally, but the words flowed easily.

“This is something that could happen to anybody,” she told the crowd. “When does this stop? When are we able to just live, to be productive citizens like we were told to be?”

For Carr, the loss of her little sister Atatiana Jefferson was still so raw. It was just 15 days earlier that she was fatally shot through a bedroom window in her home by Fort Worth police officer Aaron Dean, who was responding to a wellness check request on her home from a neighbor.

Jefferson had been playing video games at home with her 8-year-old nephew, Zion, when she heard something outside and went to investigate, her family says. Zion watched as his 28-year-old aunt moved toward the window and peered outside before being shot and collapsing to the floor.

Ten days earlier, former Dallas police officer Amber Guyger was convicted of murdering Charles-Findley’s little brother Botham Jean in his own home. He was eating ice cream and watching TV on his couch when Guyger, off-duty but wearing her uniform, came through his door and shot him. She thought she was in her own apartment, which was one floor below, and believed the 26-year-old was an intruder. Both Dean and Guyger are white.

When does this stop? When are we able to just live?
Ashley Carr, sister of Atatiana Jefferson

It’s been over a year since her brother was killed, but Charles-Findley says she’s still processing what happened and sometimes calls his house to see if he’ll pick up. When she saw the news about Jefferson’s death, she felt like she was “dreaming.”

“It’s so similar to what happened to my brother,” she told HuffPost. ”I was the one who received the call from the hospital so I imagined what [Jefferson’s family members] were going through. I felt it. It really hurt to see that.”

She said she felt compelled to meet Carr on Monday to offer her support and let her know that she’s not alone.

Though some view the Jean and Jefferson cases as anomalies, the attorney representing the victims’ families, Lee Merritt, recognizes them as part of a horrifying, long-standing pattern of police brutality against Black people.

“I’ve always held out that Botham’s case was not really unique,” he told HuffPost. “I don’t see how it’s different than the dozens of other wrongful death cases where the suspect is unarmed or non-violent and the police officer perceives a threat where there is none and uses deadly force.”

Merritt, who has represented dozens of victims and their families in high-profile police brutality cases, described both Jean and Jefferson as extraordinary people.

Jean was a successful accountant and a dedicated member of his church’s choir. Jefferson was a first-generation high school graduate who went on to earn a biology degree at Xavier University in Louisiana. She recently moved into her mother’s house to help support her financially and physically.

“You could write a book about her that was just about her life and it would still be a page turner … beyond how she was killed,” Merritt said. “The same is true for Botham.”

While speaking to the crowd in Foley Square on Monday, Carr remembered her sister’s selflessness and drive and questioned how Black people can feel safe when they are gunned down by police in their own homes.

“We did not come from money,” she said. “We struggled to get where we are. … So to prevail and still push through and get a degree in biology — it was just like, ‘Oh my God, you can do this. You do not have to be a statistic of your environment.’ But for you to still get killed, it’s like what else can you do?”

The majority of police brutality cases end without charges or convictions against the officers, though in recent years, several ― including Guyger ― have been held accountable by juries. Still, some members of Jean’s family believe the 10-year prison sentence Guyger received is too light.

Fort Worth’s police chief said he intended to fire Dean, the officer who killed Jefferson, days after the shooting, but Dean resigned first. Police are investigating the incident, but haven’t yet charged him with a crime.

Carr said she believes her sister’s case is “open and shut” and should lead to a murder conviction for Dean. She’s happy to have Charles-Findley and Jean’s family in her life as the litigation involving her sister’s death begins to unfold.