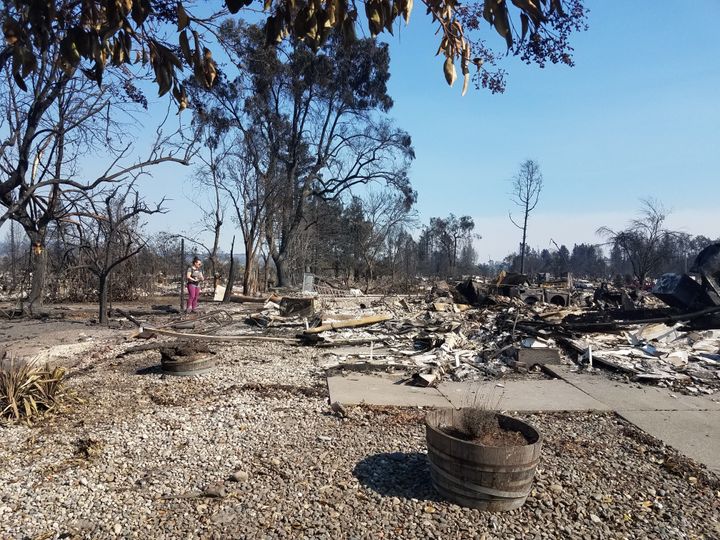 For survivors of the deadly 2017 fires in California’s Sonoma County, the past few days ― with another major blaze growing in the county, leading to mass evacuations and power outages ― have felt like reliving a nightmare.

Mellissa Edney, who lost her home in Santa Rosa in the October 2017 fires, had just moved into her newly rebuilt house last week, with her husband and two daughters, ages 1 and 3. Then the Kincade fire hit. On Wednesday night, as the blaze burned near Geyserville, just a 30-minute drive north of her house, Edney could see the flames on the mountain ridge in the distance.

“There’s no sleep. The stress and anxiety are overwhelming. The constant thoughts of what happened two years ago just keep coming up,” Edney said. Her house still has power by “miracle,” as she put it, and she’s decided to stay put even though they’re in a mandatory evacuation zone. Her husband, David, a deputy sheriff for the county, has been keeping her posted with the latest fire news. She’s packed and ready to go if he says the word.

This month marked two years since the October 2017 fires, the deadliest in the state at the time, killed 44 people and burned 3,000 houses in Santa Rosa. The Tubbs fire leveled Edney’s neighborhood of Coffey Park, turning block after block of houses into a field of ash.

As of Tuesday, the Kincade fire ― one of 10 major blazes across the state ― had grown to over 75,000 acres and was still only 15% contained, with more than 4,000 firefighters battling it. It’s burned 124 buildings so far and spurred the evacuation of about 180,000 people from the area. More than 2,800 people stayed in Red Cross and other shelters across the state Monday night.

Pacific Gas & Electric also cut power to more than 2 million people in the region over the weekend in an attempt to prevent more fires as winds of over 100 mph blew through the area. On Tuesday, even as about 40% of those who’d lost power still had not had it restored, PG&E launched another round of outages, which were expected to leave nearly 600,000 households in 29 counties ― over 1 million people ― without electricity by the end of the day.

“It’s been every bit as traumatizing as the first fire without the actual loss of our home,” Edney said, noting she’s also been obsessively checking for fire updates online. “I’ve been fighting off having a breakdown for several days now, reminding myself to stay strong for my girls.”

Edney hasn’t been the only survivor glued to the news since the fire started. Jeff Okrepie, another Coffey Park resident who lost his home in 2017, has been constantly checking the Cal Fire “incident map,” Twitter and the National Weather Service.

Okrepie stayed up all night Saturday monitoring evacuations. Finally, about 4:30 a.m., when the mandatory evacuations hit their area, he piled his wife, their 3-year-old son and 1½-year-old daughter into the car and drove to his niece’s in Petaluma. They’ve been there since, at one point totaling 11 family members and five dogs in the three-bedroom house. His sister’s family, parents and grandparents had all been evacuated, too.

“It’s heightened stress and anxiety, short tempers,” he said of what he’s been feeling since the blaze started up. His family hasn’t even moved back onto their property yet since their home burned two years ago ― the house is still being rebuilt and is supposed to be ready by Christmas.

I can’t go through this again. I just can’t.
Mellissa Edney, survivor of the October 2017 fires in Sonoma County

California’s wildfires have been breaking records over the past few years. Last year, the Camp fire near Paradise overtook the 2017 Sonoma fires as the deadliest ever in the state, killing 85 people and burning nearly 18,000 homes ― about 150 miles northeast of Santa Rosa.

PG&E, which has drawn outrage with its repeated power shutoffs this month, was linked to the igniting of the Camp fire when one of its electrical lines malfunctioned.

Pam van Halsema, who’d just moved into her newly rebuilt home in Coffey Park earlier this month, was already “feeling on edge” when the first power outages hit weeks ago. “I found that really unnerving,” she said.

Then last Wednesday night, as she was leaving a “resilience” and “self-healing” group she led for neighbors dealing with PTSD from the 2017 fires, emergency responders driving through the area warned her of a blaze burning in Geyserville. She and a neighbor quickly climbed to the second floor of their rebuilt houses and saw the flames glowing on the far-off hill.

Ever since, van Halsema has been doing breathing exercises to try to calm her nerves. On Saturday night, as the winds picked up and evacuations spread, she packed her husband and two kids, ages 15 and 12, and their 60-pound dog into the car and drove to her sister’s home in Santa Clara, south of San Francisco, pulling up at 2 a.m. She’s been there the past few days, grateful for the electricity and the distance from the blazes, but also worried about her neighbors.

“Recovering from the stress and trauma of a fire is not something you just get over,” van Halsema said. “So to have this repeat seems quite overwhelming and makes people wonder… how could I possibly do it again?… It’s just too much.”

On Fire And In The Dark, California Braces For More Dangerous Winds