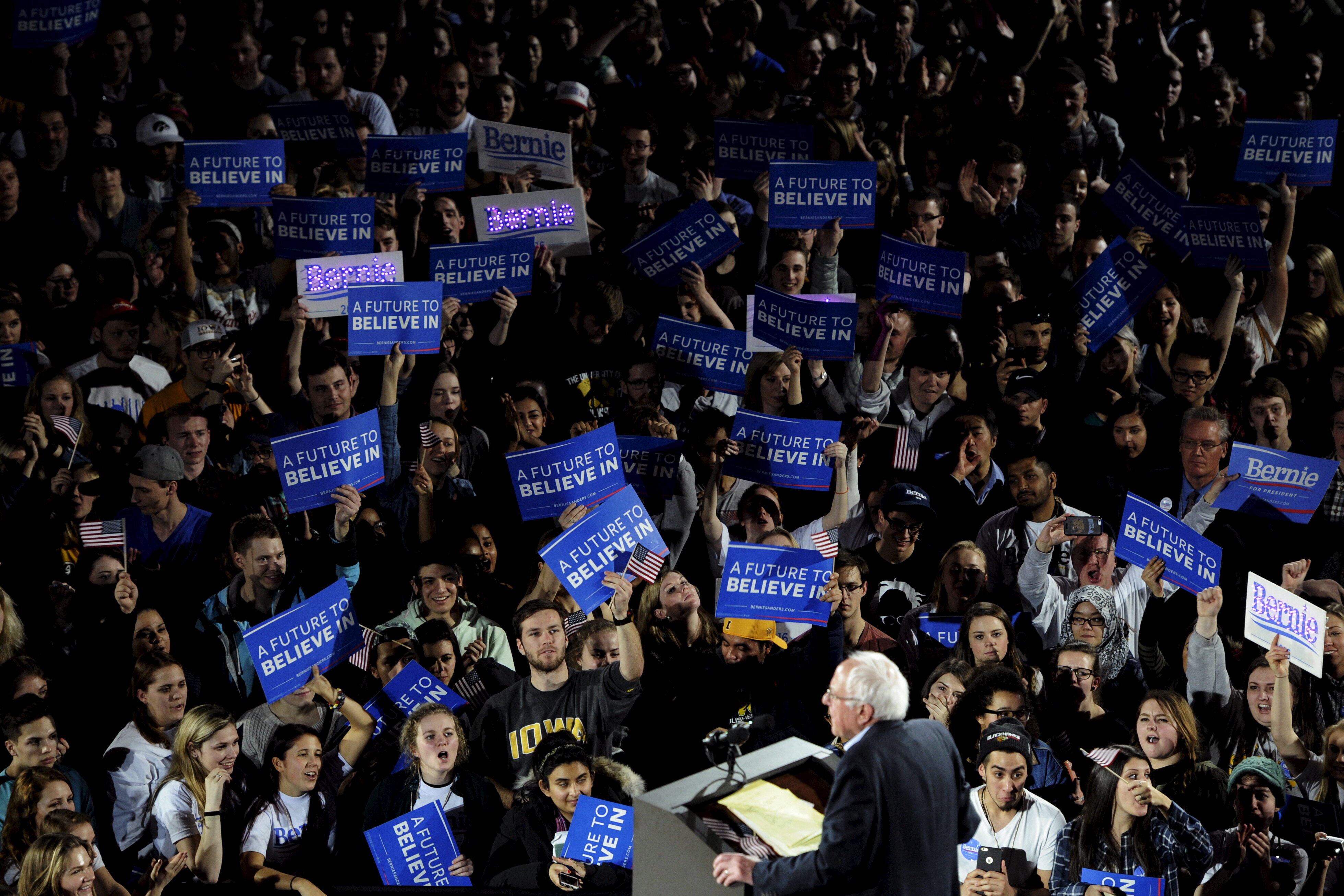 INDIANOLA, Iowa ― During the 2016 Iowa caucuses, the campus of Simpson College in this suburb of Des Moines was Bernie Sanders territory. In fact, every college campus in Iowa was.

The Vermont senator won the votes of 84% of Democratic voters under the age of 30, according to caucus entrance polls. They were the base of a coalition that nearly toppled Democratic frontrunner Hillary Clinton.

But polling, as well as interviews with campaign operatives and with students at four campuses across the state, shows these same voters are up for grabs in 2020.

Sanders and Massachusetts Sen. Elizabeth Warren, with their proposals to wipe away student debt and promises of systemic change, are the leading candidates among young Democrats, but there is also substantial support for South Bend, Indiana, Mayor Pete Buttigieg and interest in New Jersey Sen. Cory Booker, both of whom are trotting out a youthful, optimistic message. Former Texas Rep. Beto O’Rourke brings a similar appeal. Businessman Andrew Yang’s outsider status is attractive, as is the potentially history-making candidacy of California Sen. Kamala Harris. Former Vice President Joe Biden has pockets of support, but some students were dismissive of his candidacy. Almost every campaign is hyping their sustained outreach to young people, and many have staffers in Iowa dedicated to it.

If one candidate is able to bring together young voters in a fashion similar to Sanders ― or even to President Barack Obama, who won a majority of those votes in what was essentially a three-way race in 2008 ― that candidate could reap significant political rewards. But if the under-30 crowd splits their votes among multiple candidates, it could benefit Biden, who has strong support among the oldest, most reliable voters in Iowa.

We want someone who’s not patronizing us. We don’t need jokes, we don’t need dances or TikToks. We have serious problems that we want to talk seriously about.
Jailyn Seabrooks, student body president at Simpson College

The headline battle at the moment is between Warren and Sanders. On a swing through Iowa in October, Warren visited four college campuses in a three-day period. Her campaign aides downplayed the idea that the trip was meant as a play for Sanders-supporting young voters ― and plenty of attendees at the events had at least flecks of gray in their hair ― but it did give the campaign a chance to highlight the students backing her.

Simpson College’s student body president, Jailyn Seabrooks, introduced Warren at the event. Seabrooks, who decided to become a political science major the day after the 2016 election, said the number of presidential candidates was “overwhelming” for students voting for the first time.

“We want someone who’s talking about our issues,” said Seabrooks, who cited Warren’s stances on student debt and veterans’ issues as her reasons for backing the senator. “And we want someone who’s not patronizing us. We don’t need jokes, we don’t need dances or TikToks. We have serious problems that we want to talk seriously about.”

College students and other young voters traditionally played a microscopic role in the Iowa caucuses, where participation can require hours of commitment. That changed in 2008. Obama’s campaign heavily targeted high school and college students, and caucus turnout among young people jumped 135% compared to 2004. Obama won the support of 57% of the voters under the age of 30, compared to 14% for former North Carolina Sen. John Edwards and 11% for Clinton. (Obama won 38% of the overall vote in the state.)

There are limits to how far popularity, even overwhelming popularity, with young voters can take a candidate. Even though Sanders won 84% of those under 30 in 2016, according to entrance polls, those voters made up less than one-fifth of the total caucus electorate, and he lost the overall vote to Clinton, albeit by less than a percentage point.

Still, operatives for many Democratic campaigns believe youth voter turnout could spike again, likely as part of an overall jump in primary turnout. During the 2018 midterm elections, young people cast ballots at double the rate they voted in 2014.

“I haven’t seen anything to dissuade me from the fact that young people are going to be more engaged,” said John Della Volpe, who conducts regular polls of college-age voters for Harvard University’s Institute of Politics. “I imagine this is going to carry over into the caucus.”

He just seems bureaucratic. He’s been in Washington a lot longer. He’s just out of touch.
Max McPartland, a Drake University sophomore speaking about Joe Biden

On campuses across Iowa, students who spoke to HuffPost were keenly aware of how much influence they could have over who becomes the nation’s next president. Seabrooks noted that five of the last six presidents had visited Simpson, which has only 1,250 undergraduate students.

At a Warren town hall at Drake University, a sophomore business major named Max McPartland said he would be “stupid not to come out and experience this.” McPartland, who was interested in Warren but planned on caucusing for Buttigieg, said he had considered many of the candidates ― but not Biden.

“He just seems bureaucratic. He’s been in Washington a lot longer. He’s just out of touch,” said McPartland, who was standing in line for a photo with Warren. “Not a lot of big, new ideas.”

That sentiment is not an isolated one, and it’s one the Biden campaign is working to overcome. Jesse Harris, one of the Biden campaign’s top advisers in the Hawkeye State, emphasized Biden’s success in passing legislation on issues that students care about, including gun control and climate change.

“If we’ve learned one thing from the past couple of years, it’s that experience does matter. And that understanding how government works matters,” Harris told HuffPost. “If you want to rejoin the Paris accords” ― the international agreement to fight climate change abandoned by the Trump administration ―  “Joe Biden can do that faster than any other candidate because he has the experience internationally.”

He’s offering plans that are more extreme than any other candidate on issues we care about like climate change and student debt.
Zoe Swinton, a senior who heads up Hawks for Bernie at the University of Iowa

Sanders, meanwhile, is fighting to hold on to as much of his base as possible, training more than 1,300 college-age volunteers in Iowa over the summer. While the democratic socialist was never going to replicate his utter dominance of Clinton among young adults, his base still skews youthful. (The campaign boasted on Wednesday about Sanders’ victory in an unscientific straw poll of high school voters in Iowa.)

“We believe students will caucus for the only candidate who’s spent his entire life taking on the greed and corruption of the corporations who caused the climate crisis, profit from student debt and reap the biggest rewards of a rigged economy,” Sanders spokesman Mike Casca said.

Zoe Swinton, a senior at the University of Iowa who heads up Hawks for Bernie ― the university’s teams are the Hawkeyes ― said the proposals the senator is best known for, especially his push to wipe out student debt, continue to draw students to his campaign.

“He’s offering plans that are more extreme than any other candidate on issues we care about like climate change and student debt,” Swinton said. But she also said she spends time debunking some myths about the senator. She often explains to students “what democratic socialism actually is, how progressive policies can actually work.”

Sanders and Biden do share a hurdle: the perception of them as old. Sanders is 79, Biden is 76. Warren is 70, but not a single student expressed concerns about her age.

Addie Cosgrove, who works for the Biden campaign on Drake University’s campus, said she dismisses concerns about Biden’s age: “I don’t really see this as an issue myself because Joe Biden isn’t that much older than Elizabeth Warren. They’re all the same age.”

Swinton said she counters students’ concerns about Sanders’ health by pointing to his rally and parade performances across the country. “The heart attack was a scare for some people. But he honestly seems rejuvenated,” she said. “It’s a four-year term. He can last.”

I love her already. All of my friends are tired of hearing me talk about Elizabeth Warren all the time.
Rachel Fischer, a junior at Drake University

Most of the Democratic presidential campaigns are focusing their student organizing efforts at Iowa’s three largest campuses ― Iowa State in Ames, the University of Iowa in Iowa City and Northern Iowa in Cedar Rapids ― while also reaching out to students at Drake, smaller liberal arts colleges like Grinnell College, Northwestern College and Simpson, and larger community colleges in the Des Moines area.

And seemingly every campaign is engaged in aggressive outreach: Warren has the endorsement of eight former and current presidents of College Democrats chapters. Booker held a press call with student reporters at the beginning of the year, and two of his top Iowa staffers worked at the youth-focused advocacy group NextGen America during the 2018 election cycle. During this year’s back-to-school weeks, Buttigieg purchased Spotify and Pandora ads, interrupting students’ playlists with his pitch.

Getting an exact handle on how college students, and young people in general, are planning to cast their ballots can be difficult, with different public pollsters setting different age brackets. The last iteration of the Des Moines Register’s Iowa Poll found Warren leading Sanders among voters under age 35 by a 27% to 22% margin, with every other candidate under 10%.

A national poll conducted weekly by CollegePulse and Chegg, a textbook rental company, looks only at college students. It found Sanders with a consistent lead until earlier this month, when Warren went ahead 30% to 28%. Biden drew 10%, Yang was at 9% and Buttigieg drew 7%.

And of course, plenty of students remain undecided.

Luke Hoffman, a junior math, physics and education major, was standing in line at Warren’s Drake town hall with his friend Rachel Fischer, a junior biology major. Fischer was not shy about her support for Warren: “I love her already. All of my friends are tired of hearing me talk about Elizabeth Warren all the time.”

But Hoffman wasn’t ready to commit to Warren just yet. And he has another voice in his ear: His roommate is the head of Bulldogs for Pete.