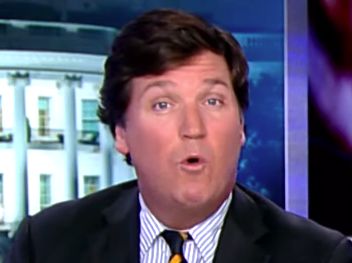 On Monday, the “Tucker Carlson Tonight” host came thisclose to echoing the ugly sentiment during a discussion about migrants who seek asylum from uninhabitable conditions in their home countries that have been caused by the climate crisis.

Justin Haskins, of the right-wing climate change-denying Heartland Institute group, said if it was true that human beings are causing climate change, then “why are we bringing people from all over the world, where they produce CO2 emissions less per person, in places like Mexico and Guatemala, places like that, why are we bringing them to the United States, where we produce CO2 emissions per person at a much higher rate?”

“And also, if you cared about the environment, which I personally do, emphatically care, I actually go outside once in a while unlike most people on the left, why would you want a crowded country? Isn’t crowding your country the fastest way to despoil it, to pollute it, to make it, you know, a place you wouldn’t want to live?”

Tucker Carlson says admitting more migrants to America is a way to “despoil it, to pollute it, to make it a place you wouldn’t want to live” pic.twitter.com/AKht7fRCjm

This is flat-out white nationalism and identical to what you’ll find in neo-Nazi chatrooms (as well as in far-right terrorist manifestos) https://t.co/4nWCPkOBJ9

Tucker Carlson is a fascist. https://t.co/bNssRVX7Ai

Folks, this is @TuckerCarlson with a full display of #whitefear https://t.co/8iQdUpNA94

This is just standard boilerplate racism from Tucker Carlson, of course, but I think his weirdest line in this segment was, “I actually go outside once in a while, unlike most people on the left.”

1. Tonight, in his continuing effort to make democrats the target of hate to organize the modern brownshirts, fascist @TuckerCarlson actually said that democrats don’t like to go outside. We murder babies (that one is straight out of an anti-Semitic trope), we hate our country…

2. .. we undermine our military, we hate God, etc. This is the kind of crap that German fascists used to inspire violence. “They are not human – look!” We never go outside! Of course, he does this in the middle of screeching about immigrants. Bottom line: tucker is a neonazi.

Does this person still have sponsors for his show? Just asking… https://t.co/FcULITCmp9

White nationalist Tucker Carlson said something awful and racist in his show? NO WAY. https://t.co/S25g16YtSr

Carlson’s primetime Fox colleague Laura Ingraham, meanwhile, (who has a long history of peddling white nationalist talking points on her show) on Monday characterized the 2020 election as a choice “between preserving our booming economy, our history and our heritage, the good and bad of it, and reversing, or reversing and repudiating all of that.”

“On this Veterans Day, we honor all of those who served armed forces over the years,” she said. “And I don’t think they sacrificed so that the rest of us could fritter it all away on a socialist or a globalist power grab that delivers nothing but pain and misery.”

Check out the clip, courtesy of Media Matters, here: