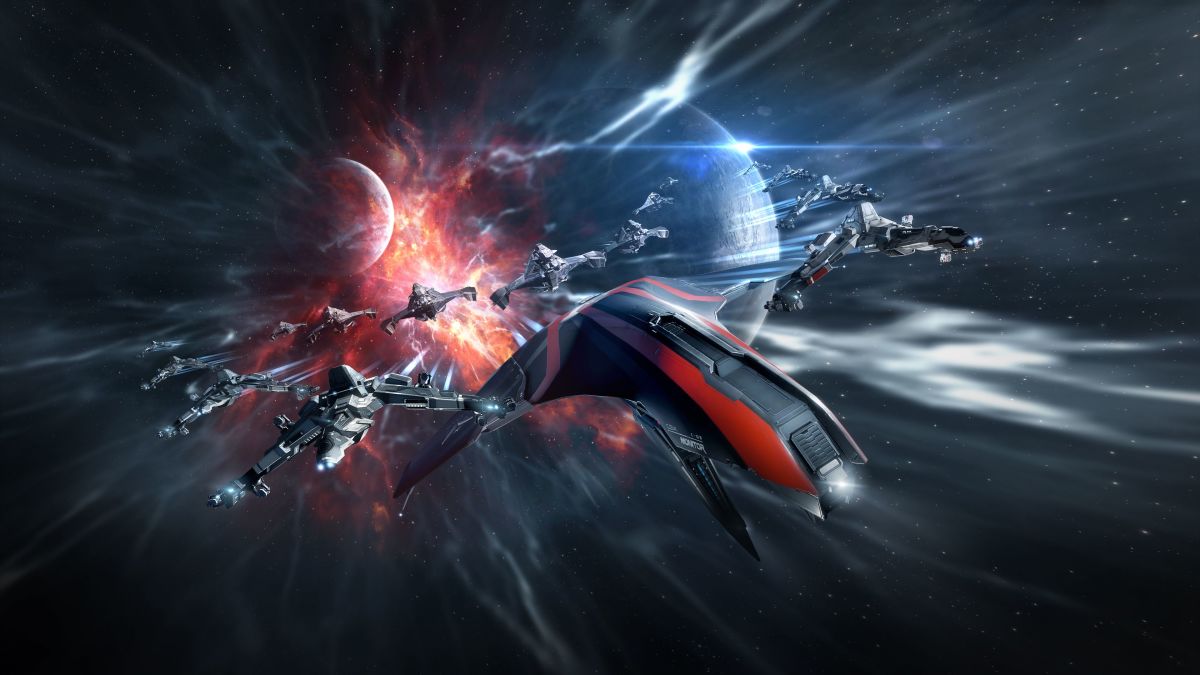 This month has seen a flurry of announcements about EVE Online’s immediate future. Alongside the usual spaceship changes and rebalancing, a brand new, somewhat controversial skill system will be introduced, as well as what sounds like a largely cosmetic change to the game that could have huge implications for players.

In almost every big science fiction work that involves massive amounts of starships, those ships are arranged in organized battle formations, arrayed out like individual troops marching to battle. Not in EVE, though: In EVE, ships drop out of warp in a disorganized clump, roughly ball-shaped, and quickly begin to clip into one another as they hurry to “anchor” on their fleet commander to follow their maneuvers. Soon, this behavior will change. Several predetermined but customizable formations are being added to the game and will be made available to Fleet Commanders, or FCs, all across the galaxy. This will allow those FCs to determine what their fleet looks like when it arrives on the battlefield.

At a glance, this seems largely like a cosmetic change with little gameplay impact. However, according to CCP Rise, one of the senior game designers for EVE, this feature may be “super overpowered” and could change the face of the game. When large fleets do battle in EVE, positioning and range control are important factors that can cause a battle to go right, or terribly wrong. Even when greatly outnumbered, a well-positioned fleet can cause damage well above its apparent “weight class.” With the new Fleet Formations update, establishing good positioning initially may become a great deal easier.

Currently, a knack for positioning is one of the most important skills an FC can have. With the update, experienced FCs will be able to warp onto the battlefield with all of their ships in optimal positions, able to bring to bear all of their firepower without the need to carefully reposition their fleet. The simple, seemingly cosmetic change may go as far as changing the entire “meta” of fleet warfare, shifting the balance of power from one type of ships to another, and causing every player that engages in this content to have to shift their focus on what ships are worth training skills for, what ships to build, and what ships to have on hand. Managing fleets will offer an even greater player skill cap than it currently has, allowing players who truly excel at that aspect of the game to further distance themselves from the pack.

It will also look pretty awesome.

The other change comes in the form of the newly announced Expert Systems. Expert Systems will allow players to, for lack of a better term, “rent” a specific set of skills for a limited time. In EVE, skillpoints are accrued over time and allocated to the skills in a player’s queue. Some skills are easier to learn than others, taking minutes or hours to train, and some take days, weeks, or even months. Because of this, players can dedicate a great deal of time to training to fly a certain ship, getting all the prerequisites and the necessary support skills, only to find that the ship has fallen out of favor, been nerfed, or that they just don’t like the playstyle. This is especially punishing to new players.

The Expert Systems update seems to be a good way to alleviate that pain point, at least temporarily. The Expert System will add special consumables to the game, which when consumed, will grant players a specific set of skills for a limited time. These granted skills will allow players to experience different ships that they aren’t able to fly much faster than traditional training. The current plan is to have these skill packs available only in the game’s cash shop, the New Eden Store, and purchasable with PLEX, the game’s real-money currency.

Many players on Reddit have criticized this choice by CCP, claiming that forcing new players to pay more money to access this feature is questionable. Others have complained that it is yet another step bringing EVE closer to “pay to win,” a term that has long been anathema to the EVE player base.

Time will tell whether or not the players embrace the new Expert System. It offers a great opportunity for players to quickly play “catch up” and be able to fly vessels beyond their normal means. It also offers a unique way for CCP to introduce new ships and weapon systems and allow players to begin using them at full strength, rather than with the traditional lead time caused by having to train newly introduced skills from the ground up.

Fleet Formations and the Expert Systems both promise to change the face of EVE’s galaxy in different ways. Players will spend countless hours exploring new ways to master the new formation options with their fleets, and potentially, players that are left behind by the shifting meta can spend some cash to catch up.