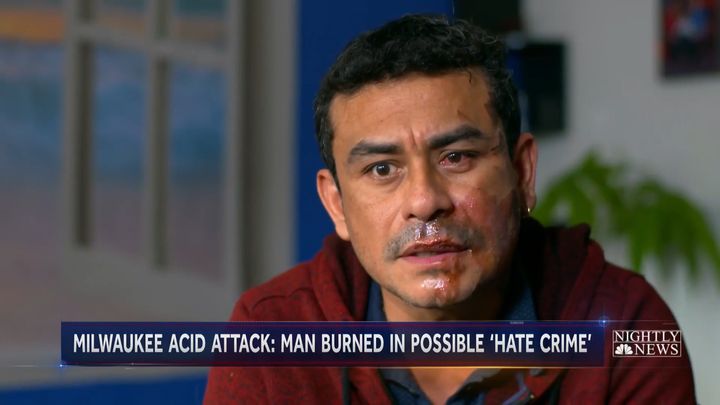 A 61-year-old man has been arrested by Milwaukee police in an acid attack on a stranger who said the assailant told him to “go back to your country.”

Police said they’re investigating Friday night’s attack, which left Mahud Villalaz with second-degree burns to his face and vision problems, as a hate crime and expect the district attorney to bring charges within a week. Police didn’t release the name of the man they arrested on Saturday.

Villalaz, 42, described how he parked his car outside a restaurant and was approached by the assailant, a white man upset that he was too close to a bus stop.

“He started talking like, ‘You don’t respect my laws. You can’t invade my country, so go back to your country,’” Villalaz, who is a U.S. citizen and Latino, told NBC News.

A Milwaukee police spokesperson characterized the crime as aggravated battery. Alderman Joe G. Perez said he has been assured the suspect will face hate crime charges.

This “was a heinous crime that will have a long-term impact on the life of the victim,” Perez said in a statement. “We as a community need to come together to work through our differences and learn to respect one another and diffuse conflict.”

Villalaz said he moved his car after the man’s outburst. But the assailant, he said, was still there ― and still angry.

Surveillance video shows the two men facing one another on the sidewalk when the assailant, wearing a hooded coat, suddenly splashes Villalaz with a cup of liquid investigators believe was battery acid. Villalaz quickly covers his face and lurches backward, out of the camera’s view, as the assailant, still holding the cup, calmly steps toward him.

#BREAKING – Video shows the moment a man was hit with battery acid. Police arrested the culprit & call it a hate crime because the victim, who is Latino, says before he was hit by the white male suspect he called him “illegal” STORY: https://t.co/WAiX44Sx9d pic.twitter.com/pb2agxS6Go

“I don’t want this guy near my kids, near my family,” Villalaz, fighting back tears, told reporters on Saturday. “My son calls me today, ‘Daddy what happened to you?’ What do I tell him? Some crazy guy did this to me?”

Villalaz’s family has set up a GoFundMe account to help cover his medical bills.