by saywharadio8 months ago8 min read 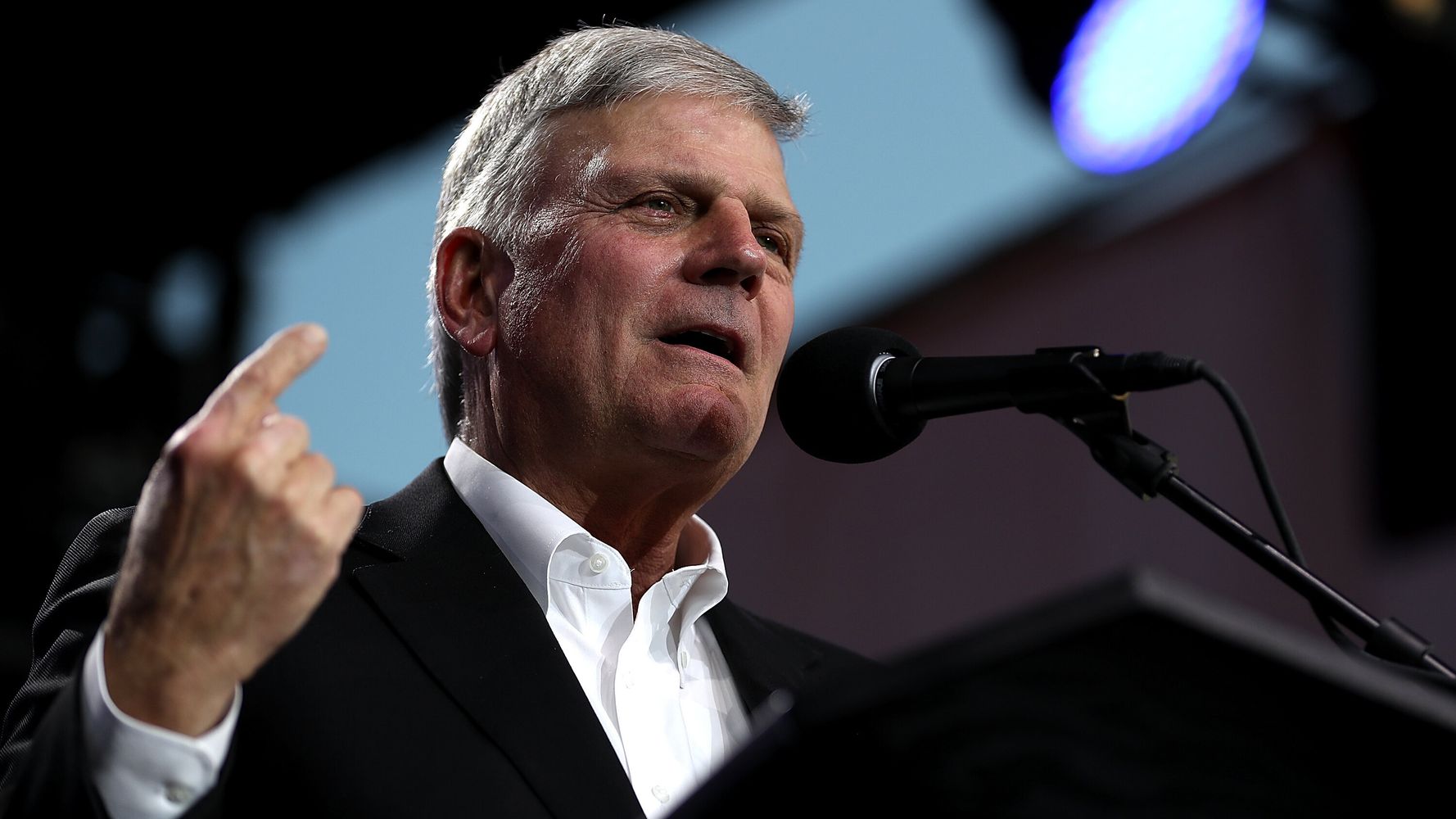 A U.K. conference center says U.S. evangelist Franklin Graham is no longer welcome to preach at the arena, citing statements the Christian leader has made that its staff deemed “incompatible with our values.”

Franklin Graham, who has called Islam “evil” and homosexuality a “sin,” was scheduled to speak at the ACC Liverpool, an arena and convention center in northwest England, in June. But after protests from LGBTQ advocates and allies in Liverpool, the arena’s staff canceled the booking.

In light of a “number of statements” Graham has made in the past, “we can no longer reconcile the balance between freedom of speech and the divisive impact this event is having in our city,” ACC Liverpool staff said in a statement published Friday.

Rev. Andrew Foreshew-Cain, a gay, married Anglican priest and a leader within the Campaign for Equal Marriage in the Church of England, said his organization welcomed the news.

“Mr. Graham, like everyone else, is entitled to his opinions and is free to express them, and there are consequences to doing so when they are so repugnant and divisive. One of those consequences has been this decision,” Foreshaw-Cain told HuffPost in an email. “It would be good if the other venues in his tour also chose to exercise their freedom not to be vehicles for the spreading of his message of hate towards the LGBTI communities in our cities here in the U.K.”

A website advertising Graham’s U.K. tour now says that the location of his Liverpool event is “TBA.” Graham is also scheduled to speak at Glasgow in Scotland, Cardiff in Wales and Newcastle, Sheffield, Milton Keynes, Birmingham and London in England.

LGBTQ leaders in Sheffield have called for the cancelation of Graham’s appearance in that city.

On Tuesday, the Billy Graham Evangelistic Association UK called for supporters to pray for the U.K. as “opposition from media” rises up against the tour, slated to start in Glasgow on May 30. The association said the media reports “aren’t dampening the enthusiasm of Jesus followers throughout the island nation in northwestern Europe.”

Roger Chilvers, the BGEA’s U.K. director of training and church ministry, said Graham is coming to the country with a “message of hope that transforms lives when nothing else can.”

“That needs to be heard, and that’s what will be the central message that we proclaim,” Chilvers said.

For years, Graham has teamed up with local churches to hold “festivals” in stadiums around the world, similar to the “crusades” held by his famous father, the late Billy Graham. But the younger Graham’s controversial political and social stances have drawn criticism from some pastors, politicians, queer activists and Muslims in the cities he visits.

After hearing that the preacher was coming to their city, the Liverpool City Region Pride Foundation issued a letter warning city officials and ACC Liverpool about Graham’s “poisonous views.”

“We are sure that you share our stance that these types of dangerous views are not welcome in, or representative of, our great city and to ask that the booking is immediately reviewed and canceled,” the letter said.

#UPDATE We’re pleased to hear that @ACCLiverpool have reconsidered and cancelled the #FranklinGraham event.

Hate is not welcome in our city & pleased to know they stand alongside us.

We’ll continue to work with them and our other partners, to make sure this continues to be so. https://t.co/ippF4XEdp7

Liverpool Mayor Joe Anderson expressed his support for the arena’s decision to cancel the booking.

Our City is a diverse City and proud of our LGBTQ+ community and always will be. We can not allow hatred and intolerance to go unchallenged by anyone including by religious groups or sects. It’s right we have banned from the M&S Arena Franklin Graham.#Love conquers hatred always

Graham has condemned queer love as a “sin” and has claimed that Satan is behind the movement for LGBTQ rights. Last year, Graham denounced the faith of former South Bend, Indiana, Mayor Pete Buttigieg, a gay, married Episcopalian seeking the Democratic presidential nomination. Graham said that the presidential candidate’s sexual orientation is “something to be repentant of, not something to be flaunted, praised or politicized.”

Graham has suggested that welcoming LGBTQ people into churches or Christian homes is akin to allowing Satan to “devour our homes.” In 2014, he praised Russian President Vladimir Putin’s anti-LGBTQ agenda.

The preacher, a staunch ally of President Donald Trump, also has a history of making derogatory comments about Islam, calling it an “evil and wicked religion.” In 2015, he proposed barring Muslims from entering the U.S. ― months before then-candidate Trump did the same. Graham also helped peddle the “birther” conspiracy, which falsely claimed that former President Barack Obama was not born in the U.S.

In what appears to be a response to the cancelation of his Liverpool event, Graham published a “letter to the LGBTQ community in the UK” on his popular Facebook page on Monday. He doubled down on his view that homosexuality is a sin, adding that “we are all sinners.” He insisted “the Gospel is inclusive” and that LGBTQ people are “absolutely welcome” at his appearance.

Rev. Brandan Robertson, a queer author who pastors a progressive church in San Diego, California, called Graham’s claim of inclusivity deceptive. He said he believes that Christians who aren’t fully inclusive toward the LBGTQ community have adopted welcoming language as a way to lure diverse individuals into their ministries and events.

“I hear the stories of LGBTQ people who are enticed to attend evangelical churches because of [a] promise of inclusivity ― and they can actually spend years in such environments believing they are accepted because of such rhetoric ― but when they come to a place where they want to get married, want to serve in leadership, or feel called to do something public in the church, they are met with rejection and a call to repress their sexuality,” Robertson said. “This betrayal of trust often has tragic results on the faith and lives of the LGBTQ people subjected to it and deceived by it.”

Rev. Miranda Threlfall-Holmes, rector of an LGBTQ-affirming Church of England parish in Liverpool, told HuffPost she is tired of hearing people claim that it’s possible to be “inclusive” while believing homosexuality is a “sin.”

“I believe, and our church believes, that it is not good enough to say that you ‘tolerate’ LGBTQIA+ people whilst telling them they should change,” she wrote in an email. “We believe in an affirming theology of creation, that celebrates LGBTQIA+ people as beautifully and wonderfully made in the image of God.”

Threlfall-Holmes said Graham and other non-affirming Christians aren’t connecting the dots between their religious beliefs and the impact that this theology has on LGBTQ people. She said she wishes that Graham and others who support his stance understood how much damage their rhetoric does to LGBTQ’s people’s mental health and how it contributes to a climate of discrimination and hate.

Threlfall-Holmes pointed out that in Liverpool, an annual Pride celebration is held near the anniversary of the murder of Michael Causer, a gay local teen killed in 2008.

“Speaking of homosexuality as a sin can’t help but be implicated in validating and promoting such attacks in the minds of those who carry them out, and churches generally need to actively repent of such views which have caused so much harm,” she said.

Graham has faced resistance in the U.K. before. His 2018 visit to Blackpool, England, was preceded by months of condemnation from politicians and activists. The event ultimately took place as scheduled ― but protesters gathered outside the convention hall, queer-inclusive churches in the area organized alternative events and the city’s iconic tower lit up in rainbow colors.

Foreshaw-Cain said he believes Graham’s views about LGBTQ people will be soon be consigned to history.

“Society is changing, his views are part of our past and not our future,” he said.