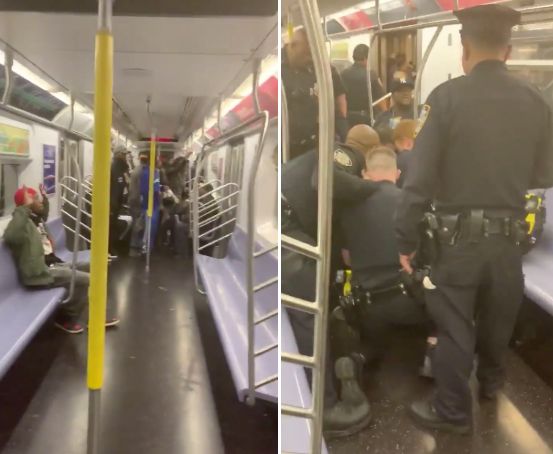 Video showing New York City police officers mobbing an alleged subway fare evader on a train has gone viral over the officers’ handling of what police said was ultimately a mistaken report of a man with a gun.

The video taken in Brooklyn on Friday shows the man seated on a subway train car with his hands held in the air as officers gesture at him from outside the car while waiting for the doors to open. On either side of the man, fellow riders huddle together on opposite ends of the train car.

“If you can’t see, the reason everyone moved was because all the police had taken out their guns and aimed at him,” Elad Nehorai, who uploaded the video, wrote on Twitter.

The video showed nearly a dozen officers rushing inside once the train car’s doors were open and forcing the man to the ground before frisking him. At least one officer is seen putting away his firearm.

New York Police Department Chief of Transit Edward Delatorre, in a statement posted to Twitter, said the man in the video ran into the train car after being approached by officers who had been told by a “credible witness” that he was armed with a gun. The man managed to flee to the next subway stop where the train was held so officers could take him into custody.

In case you’re wondering how an arrest in NYC goes down. The guy has made absolutely no indication that he would flee or fight and wasn’t trying to hide.

If you can’t see, the reason everyone moved was because all the police had taken out their guns and aimed at him. pic.twitter.com/dAstrtMntz

Police have said no weapon was found on the man, identified by local media as 19-year-old Adrian Napier. He was charged with theft of service for jumping the subway turnstile. Police also said that Napier was also found “wanted for questioning in regard to a past larceny,” NBC New York reported.

Though the police department has defended the officers’ actions, people responding to the video on social media have accused the officers of going too far.

“My sons were in this train car. My 10-year-old came home inconsolable,” a woman identified as Yolanda Sangweni wrote. “How do we, as parents, even begin to speak to them about this kind of violence?”

Nehorai, 35, also accused the officers of creating a public disturbance that left passengers in the train car fearing for their lives.

“After that one policeman took his gun out, two or three more took them out,” he told The Washington Post. “For a moment, they were kind of pointing guns at everyone who was in that vicinity.”

A spokesperson for the NYPD did not immediately respond to a request for comment on Monday.

The city’s Civilian Complaint Review Board, which oversees complaints of police misconduct, reached out to Nehorai on Twitter and provided information on how to file a complaint.

A spokesperson for the review board did not immediately respond to a request for comment on whether a complaint has been filed.